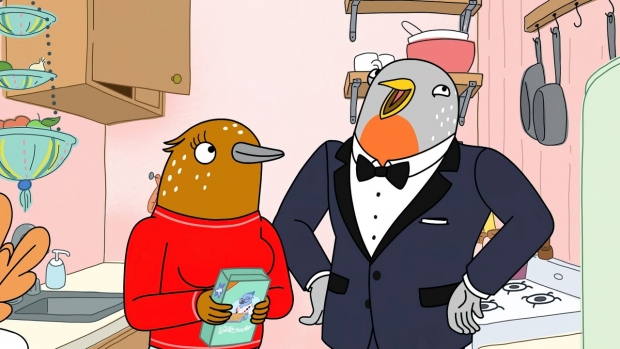 Tuca & Bertie returns for its third season on Sunday, July 10 at Midnight ET/PT on Adult Swim and the next day on HBO Max. Season 3 also debuts throughout July in Europe, Latin America, and Canada. The critically acclaimed animated series stars Tiffany Haddish (Tuca) and Ali Wong (Bertie) as colorful bird girl besties who navigate the ups and downs of adulting in life, love, and everything in between.

The millennial bird women are back in a new season full of emotional and vegetative growths! Tuca is dating someone new. Will this relationship bear fruit? Bertie has a new boss. Will they be sweet or salty? Speckle (Steven Yeun) is also going through some stuff!

"I can't wait for everyone to catch up on all the latest calamity and soul-searching from these birds," said series creator and executive producer Lisa Hanawalt. "Season 3 is packed with romance, chronic pain, ambition, large ducks, lustful trees, and hungry snakes!"

Season 2 will be available on HBO Max for fans to catch up on starting June 24. According to WarnerMedia, the popular series continues to win over audiences with considerable gains in teen viewers (ages 12-17) and young females (ages 18-24) coming to the network. During its finale week, Tuca & Bertie won its timeslot versus all ad-supported cable with P/M18-34. The series also ranked the best performing new Adult Swim series on YouTube in 2021.

Lisa Hanawalt is the series creator and executive producer along with Raphael Bob-Waksberg, Noel Bright, Steven A. Cohen, Haddish, and Wong also serving as executive producers. The series is produced by Michael Eisner's The Tornante Company and animated by Shadowmachine.