Previous 'Dawn of War' trailer creator Axis Animation and director Abed Abonamous return to the franchise to create beautiful in-game cinematics for Relic Entertainment, depicting the conflict among Space Marines, Eldar and Orks on the lost planet of Acheron. 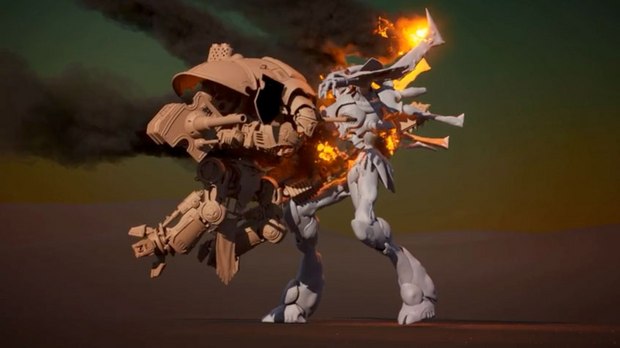 Axis Animation first stepped into the ominous nightmare world of Warhammer 40,000: Dawn of War III in early 2016 with an announcement trailer for the game that challenged expectations and revealed a haunting journey through visuals inspired by the forbidding work of painters like Zdzisław Beksiński and H.R. Giger.

Relic Entertainment -- the creator of the lauded real-time strategy series -- tasked the studio and director Abed Abonamous with creating the new game's cinematic cut scenes and imbuing them with the same tone and atmosphere as the previous trailer. Abonamous took inspiration from classical paintings to build the game’s brooding expository cut scenes, revealing a world where beauty and violence sit side by side. The team worked to create 14 minutes of compelling 2.5D “motion-painting” cut scenes, each exhibiting the scope and fury of Dawn of War III’s violent clashes with the same oppressive atmosphere that pervaded the initial trailer.

Dawn of War III returns gamers to the battle-scarred frontlines of Warhammer 40,000, bringing the conflict among Space Marines, Eldar and Orks to the lost planet of Acheron.

As a team of Warhammer fanatics, Axis Animation showed due reverence for the beloved tabletop franchise. Axis collaborated closely with Relic to ensure the cut scenes hit the right notes from pre-production on. “Relic had a clear idea of the storyline; they gave us detailed scripts that covered all of the cut scenes’ narrative beats,” explained Abonamous. “They also gave presentations revealing how the scripts tied into the game’s narrative context, revealing what would happen between one cut scene and another. That was a kind of ‘narrative glue’, which we used to think of the cut scenes as part of a larger tapestry.”

The team chose to implement the cut scenes as a series of “deep paintings:" Each frame revealed an atmospheric diorama or character and environment, shrouded in the sinister atmosphere that permeates Dawn of War III. “We broke down the scripts provided by Relic into storyboard sketches, and iteratively finessed them while discussing each with the developers,” Abonamous added. “Relic’s scripts and briefings rarely mandated any specific compositions for each cut scene. We had a lot of flexibility in approach for the deep paintings we wanted to create, and could decide on compositions that allowed the camera to tell a story.”

“Relic provided high-level designs for locations and characters, as we had to make sure that the cut scenes corresponded visually to the players’ in-game experiences. This wasn’t a one-way street, however, as the cut-scenes required higher resolution assets, which meant that sometimes we would design details on characters or locations, and then send them back to Relic for signoff.”

Once the rich, tactile designs were ready, each conveying the painterly style the Warhammer 40K franchise is known for, Axis worked to give the images subtle motions and a delicate seasoning of effects, then meticulously planned the camera movements through each diorama. Axis’ animated paintings were ultimately delivered as eight separate sequences, comprising 14-minutes of beautifully brutal narrative. Concept to delivery took six months, with Axis engaging in much technical and creative thinking along the way. “The biggest challenge we faced was how to add a sense of depth to these paintings,” Abonamous recalled. “Our tech gurus came up with an approach that allowed us to use a ‘thick’ atmosphere of smoke, fog, and haze inside 2.5D compositions. We also had a lot of content to render, which always poses a challenge on projects of this scope. We streamlined the pipeline to a point where we saved time by rendering assets just once for an entire shot, regardless of the moving camera.”

Beyond the technical innovations, the final animated sequences represent a deep pool of artistic talent: the sweeping panoramas glide past in amber and copper chiaroscuro, fetid Orks and bulwarked Space Marines held in moments of frozen bloodshed. “The Axis team on Dawn of War III are fans first and foremost, so they really put their all into this,” concludes Abonamous. “We’re the guys who played on tabletop for years, and now we get to find new and exciting ways to cast light on the characters and concepts we know so well. The excitement we feel for Warhammer 40K is evident in every frame.”