‘New Era’ tease from Disney+ and Marvel may not present any new series clues to theorize about, but it ‘does’ deliver great hype and suspense. 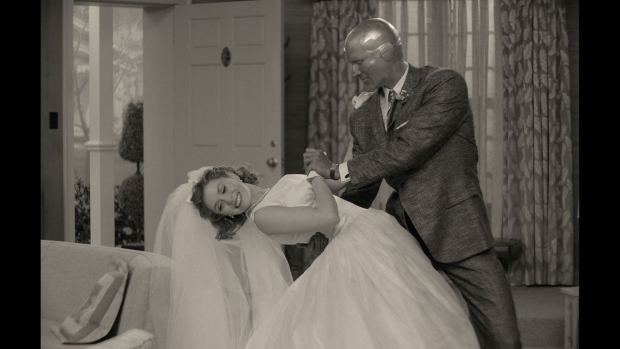 New year, new teaser! A fresh and shiny trailer has just been released for Disney+ and Marvel’s new series, WandaVision, simply titled New Era. While it doesn’t necessarily give us any new clues or informational fat to chew on, it does deliver hype and suspense. What is this show about? We feel like we’re taking crazy pills!

Anyone else feeling the Pleasantville vibes? We know that witchy Wanda Maximoff has the power to manipulate reality, and that the show is set after Endgame, so Vision should be dead. Is Wanda creating her own happy suburban existence to battle her grief, or is she trapped by something even more sinister? Perhaps Agnes, played by Kathryn Hahn, is to blame?

Theories abound, but as of now, we have only the show’s brief synopsis provided by Marvel: “Marvel Studios' WandaVision blends the style of classic sitcoms with the Marvel Cinematic Universe in which Wanda Maximoff (Elizabeth Olsen) and Vision (Paul Bettany) - two super-powered beings living their ideal suburban lives - begin to suspect that everything is not as it seems.”