Highly anticipated new animated adventure about a lone warrior who must track down the legendary last dragon to save her world releases March 5, 2021 simultaneously in theaters and on Disney+; all-star voice cast includes Awkwafina, Gemma Chan, and Daniel Dae Kim. 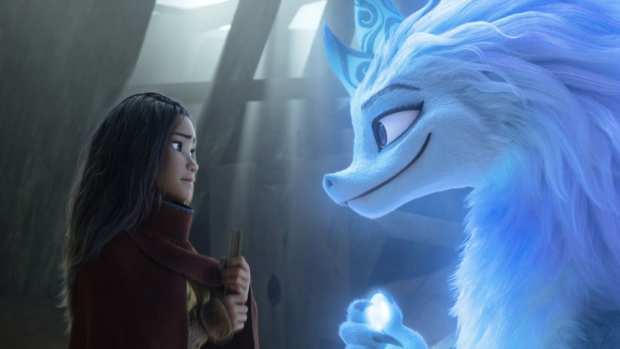 Walt Disney Animation Studios just dropped a new trailer and images for their upcoming CG animated adventure, Raya and the Last Dragon. Inspired by the cultures and people of Southeast Asia, the beautifully animated Raya was painstakingly finished safely and remotely during the pandemic.

The film takes audiences on an exciting journey to the fantasy world of Kumandra, where humans and dragons long ago lived together in harmony. But when an evil force threatened the land, the dragons sacrificed themselves to save humanity.

500 years later, the same evil has returned, and it is up to a lone warrior, Raya, to track down the legendary last dragon to restore the fractured land and its divided people. However, along her journey, she will learn that it will take more than a dragon to save the world—it is going to take trust and teamwork as well.

Don Hall and Carlos López Estrada are directing, with Paul Briggs and John Ripa co-directing. Osnat Shurer and Peter Del Vecho are the producers, and Qui Nguyen and Adele Lim are the writers on the project.

Walt Disney Animation Studios’ Raya and the Last Dragon will be available on Disney+ with Premier Access in most Disney+ markets, at the same time as it is released in theaters on March 5, 2021. Premier Access for the title will be priced at $29.99.