Chief creative officer of Pixar and Walt Disney Animation Studios to be honored with the Diane Disney Miller Lifetime Achievement Award on November 7, 2017. 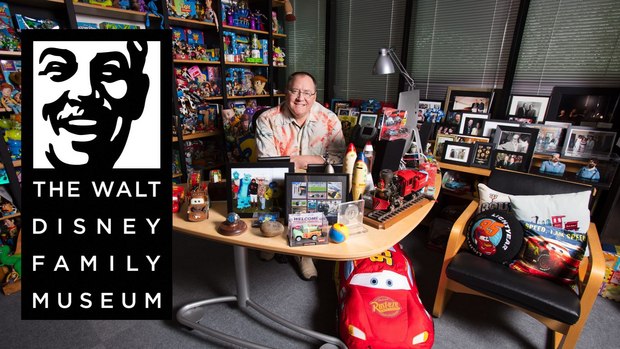 The Walt Disney Family Museum has announced that it will hold its third annual fundraising gala on November 7, 2017. The event will honor John Lasseter, Chief Creative Officer of Pixar and Walt Disney Animation Studios, with the Diane Disney Miller Lifetime Achievement Award. The accolade recognizes individuals who have made an outstanding impact in the field of arts, education, community involvement, and technological advancements.

Lasseter is being recognized for his contributions to the entertainment industry and for his extraordinary leadership and innovative storytelling, which have been instrumental in elevating and distinguishing the world of animation.

The gala is presented by the Board of Directors of The Walt Disney Family Museum. Proceeds support the museum’s programs and activities that nurture the next generation of creative talent. The gala will take place at the Golden Gate Club in the Presidio of San Francisco, a short distance away from the museum. Attendance is limited to 180 guests.

The Walt Disney Family Museum presents the fascinating story and achievements of Walt Disney, the man who raised animation to the level of fine art, transformed the film industry, tirelessly pursued innovation, and created a global yet distinctively American legacy. Opened in October 2009, the 40,000-square foot facility features the newest technology along with a vast collection of historic materials and artifacts to bring Disney’s achievements to life, myriad interactive galleries presenting early drawings and animation, movies, music, listening stations, a spectacular model of Disneyland, and much more.

The Walt Disney Family Museum has created many world-class exhibitions, such as Disney and Dalí: Architects of the Imagination; MAGIC, COLOR, FLAIR: the world of Mary Blair; and Water to Paper, Paint to Sky: The Art of Tyrus Wong, several of which have traveled to other museums around the world. The most recent, Awaking Beauty: The Art of Eyvind Earle, is the eighteenth original exhibition originated by the museum since 2012. Also open at this time is Deja View: The Art of Andreas Deja, on view through October 9, 2017.