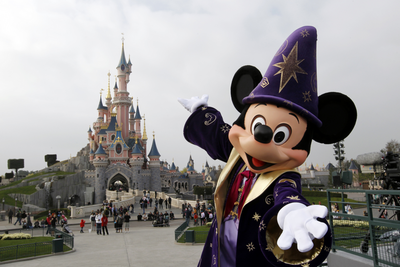 The Disney resort on the outskirts of Paris is getting a financial lifeline from owner Walt Disney Co., according to a report by the Los Angeles Times.

The $1.3 billion bailout will see the park's California executives take control of Euro Disney, which runs Disneyland Paris and Walt Disney Studios Park. Until now, the U.S. company owned only 40% of the theme park operator, alongside Saudi Prince Waleed bin Talal and a host of European small investors who originally paid 11 euros a share for their stake in the company.

The shares have traded under five euros for most of the last year, and Monday's announcement sent them lower still.

The park welcomed 14.9 million visitors last year, but this year Euro Disney forecasts that to drop to between 14.1 million and 14.2 million. Original attendance goals predicted that the park would attract up to 16 million annual visitors by 2004, but in 22 years of operation attendance has grown barely 28 percent.

Other international Disney parks appear to be faring better. The Tokyo park, which licenses the Disney theme and isn't owned by Disney, says it's been the most profitable Disney resort since opening in 1983. Meanwhile, the Hong Kong Disneyland Resort doubled its profit and saw revenue increase 15%.

Euro Disney forecast a 1-3 percent drop in revenue this year compared with last, and said it could lose up to 120 million euros in the period, compared with a 78-million loss posted last year. The company has more than 1.7 billion in debt, owed to Walt Disney Co.