Aardman and Fictioneers’ new story-driven interactive experience gets up close with the comedic duo, taking users on an urgent fixit job in Bristol as employees of their odd job company, Spick & Spanners; the free app is available on iOS and Android devices in the UK, US, and Canada. 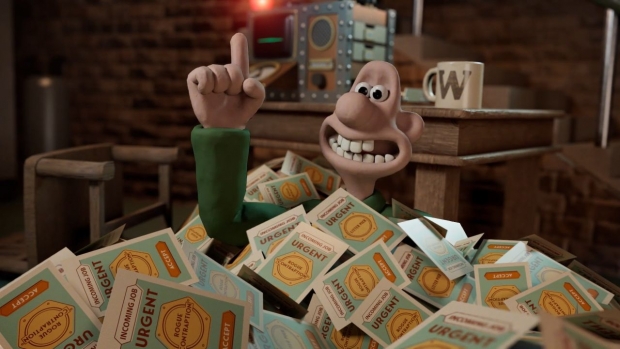 Wallace & Gromit’s latest adventure has finally arrived with today’s release of The Big Fix Up, a first of its kind, story-driven interactive experience that brings the iconic characters together with state-of-the-art augmented reality technology. Unveiling a story that evolves over time, The Big Fix up is the latest example of new, innovative approaches to storytelling made possible by the integration of real-time game engine technology and ever-increasing mobile platform computing power. The free app is now available on iOS and Android devices in the UK, US, and Canada

Starting today, new employees of Wallace’s company, Spick & Spanners, can download the app from either the App Store or Google Play and begin their employment. As viewers begin the 3-act story, they’ll start in Act 1, which includes their earliest jobs for the company, an AR hologram visit from Wallace, the opportunity to explore Wallace’s iconic living room as a mixed reality portal, taking on their first AR urgent job, and then meeting the first live-action character in a Wallace & Gromit story, Clarissa Kent. In approximately one week, on January 25th, Act 2 will begin and at this point, the story will begin updating multiple times a day until Act 3 begins in early February.

The Big Fix Up is voiced by award-winning British actors Miriam Margolyes and Jim Carter, along with Isy Suttie, Grace Ahmed, Joe Sugg, and Ben Whitehead as Wallace. You can view the full list of characters for the story here.

In producing the app, Fictioneers sought out cutting-edge AR technologies and partners; they looked to Unity Technologies, which powers more than 60 percent of the world's AR and VR content, with its new MARS product and AR Foundation toolkit, giving creators the power to build mixed reality (MR) and augmented reality (AR) applications that interact with any real-world environment. The Unity team’s technology and support have enabled Fictioneers to bring contraptions and environments to life and give them intelligent, dynamic behavior. The Big Fix Up is the result of over two years of R&D work by Fictioneers, funded by UKRI through a multi-million-pound Moving Image demonstrator funding grant the consortium won.  According to Fictioneers co-founder Susan Cummings, “We won based on a vision for the future of storytelling, driven by immersive technologies, which seamlessly blend AR, XR, game play, CG/live action video, and full motion comic strips to form a cohesive story told in real-time to the audience over several weeks. Aardman believed so much in our vision that they partnered with us to create and deliver a brand-new Wallace & Gromit story that is only told in this new way, with the user as an active participant in that story!”

Noting that their most important goal was to prove that an enjoyable story could be told in real-time via a variety of experiences and interactions, Cummings says, “Our hope is that users will come away from it feeling they had a sense of agency in that story and also that they fully understood and experienced the story - that there were no gaps in their understanding of the plot.”

Scott Ewings, Venture Lead at Potato and co-founder of Fictioneers, adds, “We are really excited to launch The Big Fix Up, the first release from our new Fictioneers studio. We believe it’s a first-of-its-kind experience, part of our vision to harness multiple technologies, media types and formats to tell enhanced, collaborative, and immersive stories in real-time. To do this, we have developed a software platform, the MUST Platform, to enable creative teams to design real-time stories, timelines and activities and then integrate a variety of transmedia to support those stories. With The Big Fix Up, we have created a new, rich, and multi-layered experience, where, for the first time ever, you can become part of Wallace & Gromit’s story. This will be the first of many releases using the Fictioneers platform."

In producing the app, Fictioneers used a variety of cutting-edge tools including Unity’s MARS technology, which gives the phone a more semantic understanding of the space it’s in; Unity’s AR Foundation, which allows support for both Google’s AR Core and Apple’s AR Kit features; Flutter, Google’s mobile app development technology); Unity “as a library;” and Unity’s High Definition Rendering Pipeline, for creating new Wallace and Gromit animated videos. “All of this is very demanding on handsets, so it’s been a process of continual optimization and testing to support as broad a range of devices as possible,” Cummings explains. “We use MARS within the Playground area of Big Fix Up, for dynamic navigation mesh creation and identifying appropriate surfaces for the content we’re placing (walls, floors, raised surfaces, etc.),” she continues. “We also use the MARS simulation environments to test in engine so we don’t have to build constantly when we’re making changes to content, thereby streamlining development.”

Unity's HDRP (high-definition render pipeline) tool allowed Fictioneers to rapidly iterate cinematics look development and closely match that of pre-rendered visuals without the lengthy render times. The out of the box HDRP shader provided the developers the ability to closely mimic real materials, bringing the iconic Wallace & Gromit to life.

“Mixed reality is a rapidly growing and changing area of technology and very demanding on mobile devices,” Cummings shares, “therefore it’s been a challenge to support as many devices as we can with a stable experience.”

As expected, the COVID-19 pandemic proved extremely challenging as well. “The finale of the story was meant to occur as a city-scale experience in Bristol, England, which we have lidar scanned,” she reveals. “COVID meant us rethinking this finale for the time being, taking that lidar data and making it something we can miniaturize and allow the user to scale for a surface in the home or scale up for the back garden or a park. That was of course the most responsible way of thinking about the finale. And it is a really wonderful experience - having Bristol ‘brought to you,’ wherever you are. Innovate UK has committed to additional funding in 2021 to allow us to offer the city-scale experience in multiple cities which we have just begun work on.”

Merlin Crossingham, Creative Director of Wallace & Gromit at Aardman says, “Wallace & Gromit have innovation, gadgets, and technology at the comedic heart of their world. Working with Fictioneers to create The Big Fix Up has been a perfect fit, allowing us to bring the duo’s fantastic fictional contraptions right into our audiences homes using the latest real technology.”

Summing up excitement over the project’s launch, as well as the future of innovative MR storytelling experiences, Timoni West, Vice President, XR Tools, at Unity concludes, “We hope that other creatives will experience The Big Fix Up and see what’s possible in terms of extending an IP and giving fans another touchpoint to virtually interact with. We see the future of AR as a part of everyday life and we’re committed to ensuring that anyone can take part in this future by creating tools that are widely accessible so that creators can reach the broadest audience possible.”