Open the public as well as to professionals, the show offers a look at the latest developments in VR and AR software and hardware. 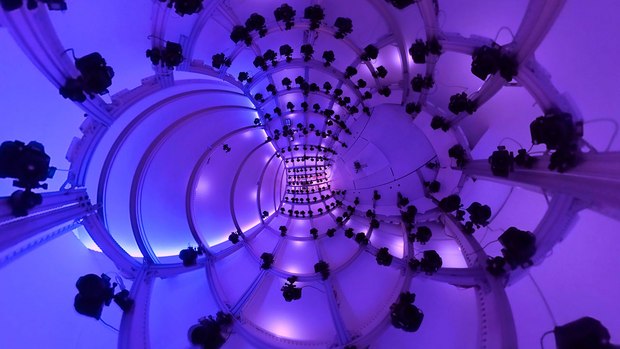 LOS ANGELES -- VRLA is exploring new realities and bringing the future of immersive entertainment to the Los Angeles Convention Center on May 4 and 5, featuring the latest innovations in virtual, augmented and mixed reality across tech, gaming, film, consumer and professional industries.

VRLA is open to the public and offers one- and two-day passes for pros, consumers and tech enthusiasts alike, with industry-leading companies exhibiting a wide array of immersive technology solutions and presenting a full schedule of keynotes, panels and sessions.

Microsoft will be exhibiting the Windows Mixed Reality Developer Showcase, where attendees will be able to engage in immersive gameplay of Beat Saber and Pixel Ripped 1989. Red Frog Digital will be debuting the Zombie HoloMaze, an interactive augmented reality horror experience inspired by Scare Mazes at theme parks across the globe. The chicane-style walk-through maze transports guests to a decrepit penitentiary overrun by zombies. While wearing a Microsoft HoloLens, attendees have a limited amount of time to find a secret antidote by exploring the maze, while encountering AR trap doors, two-headed zombie dogs and a host of terrifying blockades and undead creatures. If guests don’t find the antidote in time, they’ll be trapped in the maze forever and join the zombie prison population.

Created in collaboration with LACMA, the centerpiece of this year’s show floor will be MEZO, an interactive art installation that explores an alternative future where Mesoamerican societies have thrived and become technologically advanced. A 20-foot futuristic temple will tower over the VRLA show floor, fully equipped with LED panels, lasers, spatial music and an AR experience that transports attendees to a cyborg Amazon forest.

For the first time ever at a live event, leaders in AR storytelling Living Popups will be debuting a premier episodic comedy that VRLA attendees can experience in augmented reality. Created by a team of writers from The Simpsons, each episode of the office satire can be viewed in AR on mobile devices in locations throughout the VRLA show floor.

Industry professionals who purchase the two-day pro pass will benefit from access to the full expo, shorter demo lines and an exclusive lineup of professional and developer programming.

Passes start at just $30 and are available for purchase online until May 3 at 11 p.m. PT. For more information and to purchase a pass, visit: https://virtualrealityla.com/