VR & Avatars: Strike Anywhere Gazes into the Future of StoryTelling 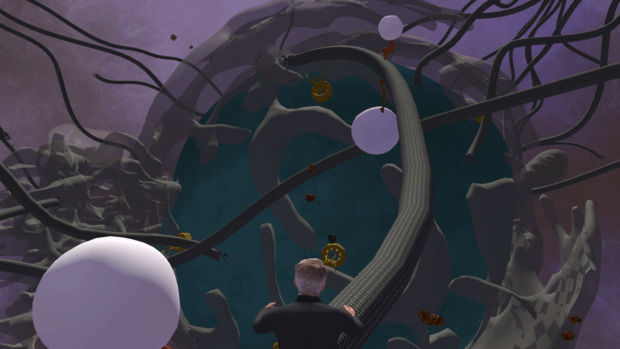 “A world of possibilities limited only by your imagination.” This was the creative technology captured by director Ryan Simon and production company Strike Anywhere when asked by Melcher Media to team up with Philip Rosedale and his VR company High Fidelity. Together they created the short film “Rebuilding Reality” for the fifth-annual Future of StoryTelling (FoST) Summit, a two-day, invitation-only gathering of 500 people held in New York City.

Philip Rosedale is the founder and creator of High Fidelity, a pioneering software platform that allows people to experience shared VR in real-time. The Strike Anywhere team was tasked with the challenge of introducing FoST attendees to the High Fidelity technology via the keenly immersive method of capturing Philip discussing his work from within the technology. Being that the means to actually record experiences in VR environments hasn't been developed yet, the team came up with a creative fix. Rather than shoot the activity on 2D screens, they decided to enter the virtual worlds and capture what they saw in real-time.

The resulting presentation is a fantastic preview of the future, offering a taste of what telling stories might be like 20 years from now as more people begin to spend time in shared VR worlds. Director Ryan Simon and his crew directed shots and action of avatars as avatars, all within a real-time VR environment. The awe-inspiring abilities of the technology were at the forefront of their minds as they went about creating the piece, invoking the production company's ethos of looking at every project from the lens of audience members first.

“Even though this is just the beginning of the technology, many of the environments were extremely intricate and impressive. Trips to living cities both past and present were just a portal away and 20 people meeting from all around the world to discuss work to be done in High Fidelity was quite a sight. Picking up objects that would be too heavy in real life…using a tractor beam…flying…who wouldn’t want to check that out?!” Simon notes.

“Our goal was to make sure you didn’t simply hear what was possible to do in environments of High Fidelity, but to see it happening,” Simon adds. W”e did the best we could to represent it as a film, but this is something that truly needs to be experienced to grasp the potential for the future.”

This year, FoST is launching a new event called FoST FEST, the world’s first immersive storytelling festival, which will be open to the public and run immediately after the Summit from October 7th–9th. There will be an exhibit space of 15,000 square feet for people to experience the technologies. FoST FEST is partnering with NYC-based organizations across the five boroughs to host dozens of satellite events that will showcase the best in citywide storytelling.