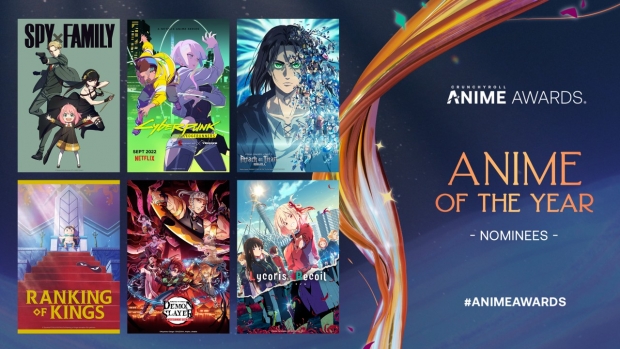 The seventh annual Crunchyroll Anime Awards nominees have been announced, with worldwide voting now open worldwide through Wednesday, January 25, at 5 PM Pacific Time. The awards honor creators, musicians, and performances across streaming and theatrical, representing more than 30 anime studios, eight streaming platforms, over 50 series, films, and more than 50 voice actors. Winners will be revealed at the 2023 Anime Awards live ceremony on Saturday, March 4, and through a global fan Livestream.

Fans are invited to vote every day for their favorites. This year Crunchyroll is offering social voting on Twitter for the Anime of the Year category. Twitter users can cast a vote by posting required hashtags or sharing a friend's tweet. Fans can visit @Crunchyroll for instructions and official rules on how to participate.

The awards event will kick off with Kenichiro Yoshida, Chairman, President, and CEO of Sony Group Corporation, opening the festivities at the Grand Prince Hotel New Takanawa in Tokyo. Voice actress Sally Amaki and entertainer Jon Kabira will host the show. Sony Music Solutions, Inc., a subsidiary of Sony Music Entertainment (Japan) Inc., will support Crunchyroll in the execution of the Anime Awards.

“The 2023 Crunchyroll Anime Awards are a global celebration of anime, which inspires emotion and joy to people and has the power to create global communities,” said Yoshida. “Crunchyroll is committed to spreading fascinating Japanese anime to the globe. It’s an honor and privilege to be with the creators, innovators, and the fans of anime to celebrate.”

Here’s a peek at the Nominees for Anime of the Year: