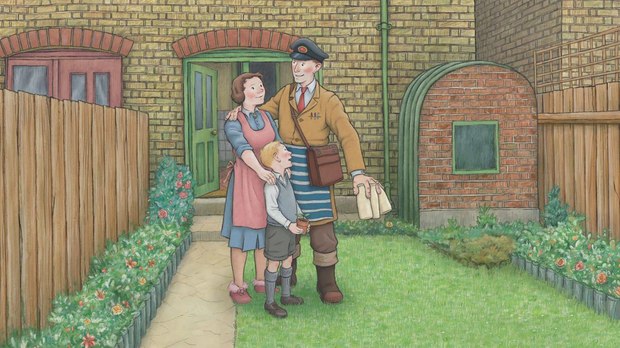 LONDON -- Production is underway on the animated feature film adaptation of Raymond Briggs’ classic graphic novel and tribute to his parents, Ethel & Ernest. Produced by Lupus Films in association with Ethel & Ernest Productions, Melusine Productions and Cloth Cat Animation and supported by the BFI, BBC, Film Fund Luxembourg, Ffilm Cymru Wales and the Welsh Government, the film is set for theatrical release in 2016. The BBC will broadcast the film on TV in the U.K.

A multi-generational team of top British talent is getting behind the microphone to breathe life into Raymond Briggs’ distinctive characters headed up by Oscar winner Jim Broadbent and Oscar nominee Brenda Blethyn in the title roles.

They are joined by LU.K.e Treadaway as Raymond, Olivier award winner for Curious Incident of the Dog in the Night-Time and star of Fortitude, screen legend Virginia McKenna (Born Free, A Town Like Alice), EastEnders actress June Brown, Pam Ferris (Matilda, Call The Midwife), The Fast Show’s Simon Day and The Thick of It’s Roger Allam.  The film will also showcase the vocal talents of 11-year-old Harry Collett as young Raymond, who starred in the music video for Michael Buble and Idina Menzel’s 2014 Christmas hit “Baby It’s Cold Outside” and is the voice of Buzzbee in Disney Junior’s animated series The Hive.

Based on the lives of Briggs’ parents, lady’s maid Ethel and milkman Ernest, the award-winning book follows their four decades of marriage from the late 1920s to the early 70s, as they live through tumultuous events in British history including the Depression, World War II and the dawn of television.

Speaking in his own inimitable style, Briggs said: “My mother’s reaction would no doubt have been: ‘Oh, Ernest! We're going to be on the pictures! We might even be at the Odeon in Wimbledon!’”

“It’s a real privilege to be directing the feature film of Ethel and Ernest, which many consider to be Raymond Brigg’s masterpiece,” added director Roger Mainwood. “Time will tell if the end result does the book justice, but so far Raymond has loved everything he has seen.  We are also delighted with the quality of the voice cast.  Brenda and Jim are absolutely bang on as the title characters and the other actors bring an enormous amount of charm and character to their roles.” Entertaining and heart-warming, the film portrays the life and times of two ordinary people living through extraordinary events and immense social change.  Ethel and Ernest meet in 1928, fall in love, marry, settle in the quiet London suburb of Wimbledon Park and raise a son. The film spans their lives through the Depression, war, post-war austerity and the swinging Sixties.  Portraying plain people speaking plain words, the film stays true to Raymond Briggs’ intimate, engaging and affectionate tribute to his parents.

“It's such a beautiful book by a wonderful artist,” says Broadbent. “It's truly inspiring; a great, honest story of a whole generation. It's lovely and irresistible.”

“I adore working with Jim Broadbent,” Blethyn adds. “We’ve worked together before and it’s great to come back together to play these wonderful characters. They lived through two wars and it’s so, so reminiscent of my own parents’ life in so many ways. Ethel even looks like my mum!”

“It’s an honor to be asked to play Raymond Briggs,” Treadaway says. “I loved The Snowman and also Fungus the Bogeyman growing up. Raymond has written this love letter to his parents and the whole time of their lives and it just seemed like a beautiful story.  I can’t wait to watch it all put together.” The hand-drawn animated feature film is produced for Ethel & Ernest Productions by Lupus Films’ Camilla Deakin and Ruth Fielding (The Snowman and the Snowdog, The Hive) and directed by Roger Mainwood (The Wind in the Willows, and Beatrix Potter’s The Tale of Two Bad Mice, Johnny Town Mouse, and Meg and Mog).  Raymond Briggs is an Executive Producer on the film, Stephan Roelants will produce for Melusine Productions and Jon Rennie is Executive Producer for Cloth Cat Animation. International sales are being handled by The Little Film Company with Robbie Little also acting as Executive Producer.