Honorees represent artists and innovators who have significantly influenced the field of visual effects; 2022 class will be celebrated at a ceremony this Fall. The Visual Effects Society (VES) has announced its newest inductees into the VES Hall of Fame to be celebrated at a special event this fall, along with the VES 2022 Honorees. The 2022 VES Hall of Fame honorees are Mary Ellen Bute, Alice Guy- Blaché, Grace Hopper, Bill Kovacs, and George Pal.

Mary Ellen Bute (1906 – 1983): A pioneer American film animator, producer, and director Bute was one of the first female experimental filmmakers and was the creator of some of the first electronically generated film images with a specialty in visual music. While working in New York City between 1934 and 1958, Butte made 14 short abstract musical films exploring the relationship of sound and image in cinema. A second body of work focused on the relationship between language and cinema through the adaptation of literary sources. Her work was shown in movie theaters often preceding major films, and several of her abstract films were part of her Seeing Sound series.

Alice Guy-Blaché (1873-1968):  A French pioneer filmmaker, Guy-Blaché was one of the first to make a narrative fiction film and the first woman to direct a movie. She experimented with Gaumont’s Chronophone sync-sound system, with color-tinting, interracial casting, and special effects. In 1912 she co-founded Solax Studios and served as artistic director. During this time, she produced A Fool and His Money – thought to be one of the first films to have an all-African American cast. The National Center for Film and Video Preservation at the American Film Institute has preserved the film for its historical and aesthetic significance. Guy-Blaché received Frances’ highest non-military award, the Légion d'honneur. She was also honored in a Cinématheque Française ceremony. 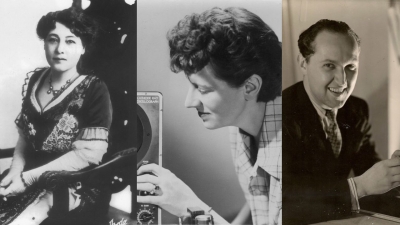 The U.S. Navy Arleigh Burke-class guided-missile destroyer USS Hopper was named for her, as was the Cray XE6 "Hopper" supercomputer at NERSC. In 2016, Hopper was posthumously awarded the Presidential Medal of Freedom by President Barack Obama.

Bill Kovacs (1949-2006):  Kovacs was a pioneer of commercial computer animation technology. As Vice President of R&D at Robert Abel and Associates, he co-developed the company's animation software. He used this software and others in the film Tron. He later co-founded Wavefront Technologies serving as Chief Technology Officer and leading the development of products such as The Advanced Visualizer. Along with Richard Childers and Chris Baker, he was a key organizer of the Infinite Illusions exhibit at the Smithsonian Institute. Following his retirement from Wavefront, Kovacs co-founded Instant Effects and worked as a consultant to Electronic Arts and RezN8, serving as RezN8’s CTO from 2000 until his death. He received a Scientific and Engineering Academy Award from the Academy of Motion Picture Arts and Sciences and two Clio Awards for his work on animated TV commercials.

George Pal (1908-1980). A Hungarian American animator, film director, and producer, Pal was associated with fantasy and science-fiction genres. He became an American citizen after emigrating from Europe. He was nominated for Academy Awards (in the category Best Short Subjects, Cartoon) for seven consecutive years (1942–1948) and received an honorary award in 1944. As an animator, he made the Puppetoons series in the 1940s, which earned him the honorary Oscar for "the development of novel methods and techniques in the production of short subjects known as Puppetoons.” Pal later turned to live-action filmmaking producing The Great Rupert. He is remembered for the science-fiction and fantasy films he produced in the 1950s and 1960s, four of which were collaborations with director Byron Haskin, including The War of the Worlds. In addition, he directed Tom Thumb, The Time Machine, and The Wonderful World of the Brothers Grimm.