DC’s free, virtual fan-first experience will be filled with epic content from the studio’s biggest movies, games, shows and comics; just released teaser trailers give fans a sneak peak of what’s in store for kids, families, and audiences of all ages. 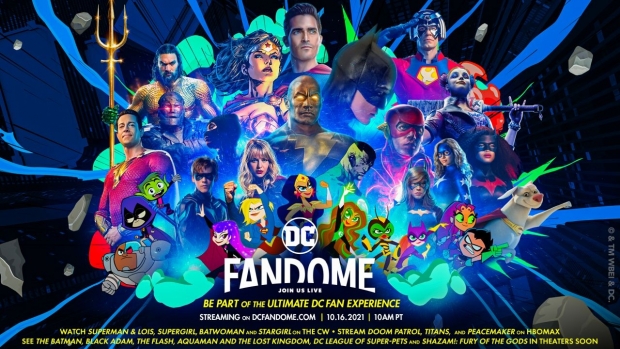 There will also be a kid focused Fandome experience on October 16 at 9 a.m. PT. The youngest DC fans will kick off the day with DCKidsFanDome.com – a special standalone experience for kids and their parents to explore the DC Multiverse with Robin and the Teen Titans; catch sneak peeks of upcoming DC animated shows and immerse themselves in at-home digital activities in a safe, kid-friendly environment. The event will be co-hosted by social media sensation and Cartoon Network’s first musician in residence, Nandi Bushell.

Watch the teaser trailers here and get a sneak peek of what’s to come from DC’s television series, films, games, comics and more!

Join the event by going to DC FanDome October 16, 2021 beginning at 10 a.m. PT/1 p.m. ET. In addition to joining the DC FanDome at the main DCFanDome.com destination, fans can watch the event via Twitch, YouTube, Facebook, and Twitter. DC FanDome will be fully accessible on phones, tablets, laptops, or desktops, allowing fans to take DC FanDome with them wherever they are.