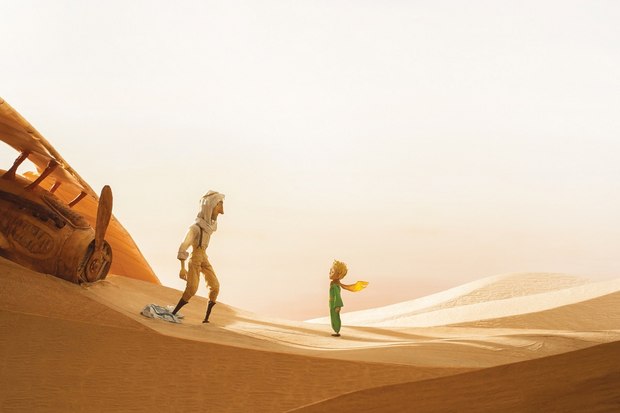 “We are honored and thrilled to welcome four amazing artists — Mark Osborne, Randy Thom, Jorge Gutierrez and Shannon Tindle — to Turin for this year’s VIEW conference as our Keynote Speakers,” says Professor Maria Elena Gutierrez, Director of the annual conference. “I know their presence will inspire our audience of students and professionals.”

The VIEW conference will take place October 19-23 in Turin, Italy. The curated conference, which is celebrating its 16th year, features talks, panel sessions, workshops, and awards for outstanding work. This year’s accomplished Keynote Speakers are:

“We wanted to pay tribute to and honor this poetic and much beloved work and introduce new readers to the fantastic world that Saint-Exupéry created more than 70 years ago,” Osborne said. The Onyx Film production releases in Italy on December 3. Randy Thom, the Director of Sound at LucasFilm’s Skywalker Sound, is the winner of two Academy Awards: for Best Achievement in Sound Editing for Disney/Pixar’s The Incredibles and for Best Sound for the live action feature film The Right Stuff. He has also received 14 Oscar nominations for sound and sound editing on other live-action and animated films, and two BAFTA Award nominations. This year, Thom was Supervising Sound Designer and Supervising Sound Mixer for director Robert Zemeckis’ The Walk; and Supervising Sound Designer both for director Guillermo del Toro’s Crimson Peak and director Steve Martino’s animated film, The Peanuts Movie.

In his VIEW keynote, entitled “Teaching the Camera to Listen: From Apocalypse Now to The Peanuts Movie,” Thom will use film clips to deconstruct the visual and sonic “nuts and bolts” that hold films together, and show how to use sound to build better movies in the future. Fox/Blue Sky’s The Peanuts Movie releases in the U.S. and Italy on November 6.

This is the second VIEW conference for keynote speaker Randy Thom, who says, “Mixing the finest media artists on the planet with fresh Northern Italian white truffles, aged Barolo and Nebbiolo, and the ambience in Turin, ensures that the VIEW Conference this year is going to be delicious. I’ve experienced the VIEW once before, and I can’t wait to go back this year -- Turin is fantastically beautiful in October! The VIEW presentations are great, and the conversations in the hallways, restaurants, and bars are exquisite. At the VIEW event, you can catch up on the latest in media art, and rub shoulders with some of the coolest people around. Yay, The VIEW!”

Jorge R. Gutierrez received an Annie Award nomination earlier this year for directing the animated feature film The Book of Life, and won an Annie Award for the character design in that film. Previously, he received a Daytime Emmy Award for the Nickelodeon animated television series El Tigre: The Adventures of Manny Rivera, as well as many Annie nominations for the series. At VIEW, during his talk titled “Every Picture Tells a Story,” Gutierrez will take attendees on a wild, 25-year journey by presenting work from his Emmy Award-winning student film, his first animated web series for Sony, TV pilots for Disney, his Nickelodeon series, and his first feature film. In doing so, the Mexican animator, painter, writer, and director’s journey is sure to inspire all attendees, whether students or professionals.

Shannon Tindle’s keynote address will lead directors, storytellers, and other VIEW attendees into a future that would have astonished Antoine de Saint-Exupéry. Tindle’s short sci-fi film On Ice, which premiered during Google’s Comic-Con panel, features a giant bear on ice skates. The 360-degree video designed for mobile devices allows people to explore all angles of the wacky story. It’s Google’s newest Spotlight Story, and it uses a brand new SDK (software development kit). Before directing On Ice, Tindle was a Character Designer on three features, The Croods, Coraline, and Curious George, as well as numerous television series and movies, including Foster’s Home for Imaginary Friends, for which he received a Primetime Emmy.

“We always try to bring an intriguing group of artists to Torino from all areas of the digital arts -- 2D and 3D computer graphics, interactive media, digital cinema, animation, gaming, and visual effects,” Gutierrez adds. “Our speakers inspire each other and the attendees. I can promise everyone that in addition to the spectacular keynote speakers we’ve just announced, this year’s Guest Speakers will also astound and delight everyone who attends.”

Scott Carroll: Carroll, whose talk is “From Comic Strip to Feature Film: The Peanuts Movie,” is a Supervising Animator at Blue Sky Studios currently working on The Peanuts Movie. He began his artistic career at Industrial Light and Magic, where he worked on such films as Van Helsing and Star Wars: Episode III – Revenge of the Sith. He later moved to New Jersey to work with Blue Sky Studios. Michael Kurinsky: For his VIEW presentation, Kurinsky will examine: “Production Designing Hotel Transylvania 2.” He is Production Designer on Sony Pictures Animation’s upcoming family comedy Hotel Transylvania 2. Kurinsky served as the art director on the hit comedy Cloudy With A Chance Of Meatballs, and first joined Sony Pictures Animation to work on the studio’s first release, Open Season. Prior to working at Sony, he was a background painter for Walt Disney Feature Animation working on such hits as The Hunchback of Notre Dame, Hercules, Atlantis, Fantasia 2000, Home On The Range, and Beauty And The Beast: Special Edition.

Kim White: White, who will present “Illuminating Joy: The Lighting of Inside Out,” is Director of Photography at Pixar Animation Studios. She contributed prop modeling and lighting for A Bug’s Life, Toy Story 2, Monsters Inc. and The Incredibles. On Finding Nemo, she was the Reef Unit Lighting Lead, and served as the Lighting Supervisor on Ratatouille. She also served as Director of Photography for Lighting on both Toy Story 3 and the recent Inside Out.

Richard Starzak and Paul Kewley: A look at the Making of Shaun The Sheep The Movie will be presented by BAFTA Award winner Richard Starzak, the Writer & Co-Director, and Paul Kewley, the Producer, of that recently released comedic, animated film from Lionsgate and Aardman Studios.

Christopher Townsend: Townsend was overall VFX Supervisor on the massive hit film The Avengers: Age of Ultron, overseeing 3,000 shots. His VIEW talk is entitled: “Avengers: Age of Ultron, Hulk, Vision, and the Gang.” A VFX veteran for over 20 years, he had been an artist and supervisor at ILM on some of the most influential movies of our time. He also worked on Journey to the Center of the Earth, the first-ever stereoscopic motion picture shot and released digitally. His other credits include contributions to Wolverine, Ninja Assassin, Percy Jackson and the Lightning Thief, and Captain America: The First Avenger. He was nominated for an Academy Award for his work on Iron Man 3.

Erik Nash: Nash’s VIEW talk, Night at the Museum: Secret of the Tomb, provides an overview of the varied VFX work made for the movie, including the making of numerous creatures which come to life in the British Museum, miniatures for the Youtube sequence and the FX work required for the Planetarium sequence. Nash is a Production VFX Supervisor with MPC who worked on that film. His other credits include contributions to Star Trek: The Motion Picture, Star Trek: The Next Generation, Star Trek: Deep Space Nine. His work on the shows earned him two Emmy Awards. In 1994, Nash moved to Digital Domain where he was visual effects director of photography on blockbusters including Apollo 13 and Titanic, and was VFX supervisor on shows such as Pirates of the Caribbean: At World’s End and Armageddon. He was nominated for three Academy Awards for VFX work on I, Robot, Real Steel, and Iron Man 3.

Michael Rubin: Rubin, Senior Innovator at Creative Technologies Lab with Adobe Systems, will analyze the most recent tectonic shifts in photograph through his talk: “Group F/64, Modernism and Photography Today.” Rubin has been a photographer for more than 35 years, with career highlights that include product positions at Lucasfilm and Netflix, and with post production roles on a number of television and film projects, including the CBS miniseries Lonesome Dove, and the Bertolucci feature film, The Sheltering Sky.

Glenn Entis: Academy Award winner Glenn Entis is a computer animation and video game pioneer who co-founded Pacific Data Images in the early 1980’s, a computer animation studio which went on to become one of the most successful in the world. At the VIEW Conference, his talk “The Spirit and Stories of PDI” will share some of what made that studio great, and some of the lessons offered by its story and people. In 1994, he left PDI to become CEO of Dreamworks Interactive (the videogame division of DreamWorks,) working closely with Steven Spielberg and creating the Medal of Honor franchise, among other hits. After Electronic Arts acquired DreamWorks Interactive in 2000, Entis took on a leadership role in guiding EA through several generations of videogame consoles, while also creating the World Wide Visualization Group, a videogame computer graphics research organization.

David Misch: Author/Comedian David Misch is the author of “Funny The Book: Everything You Always Wanted To Know About Comedy.” Among his TV and movie credits are the Emmy Award-nominated Mork & Mindy, the Emmy-losing Duckman, the Emmy-engorged Saturday Night Live, and the Emmy-ineligible The Muppets Take Manhattan. His VIEW talk explores “The Painful Relationship Between Humor and Horror.”

Dale Herigstad: Four time Emmy Award winner, and winner of the inaugural Interactive Emmy Award, Herigstad is co-founder of SeeSpace, and a thought leader on the future of interactive media. Among his credits: Creative Director of on-air design and branding for the three CBS Sports Winter Olympics broadcasts in the 1990s. He was also a member of the research team that developed the visionary gestural interfaces that first appeared in the film Minority Report. Herigstad will speak about “Spatial Interaction: Navigation Beyond the Screen.” Motion graphics and computer graphics have always been about objects in a space. As the world moves “beyond the screen,” interaction is more complex and requires greater levels of simplicity. He will show and discuss past and current experiments that explore how these new spatial frontiers can be navigated, and will present to his audience the possibilities of this rapidly evolving field.