Join a virtual conversation about the intersection of good/bad story and good/bad design with ‘The Willoughbys’ director and Escape Studios’ Saint John Walker. 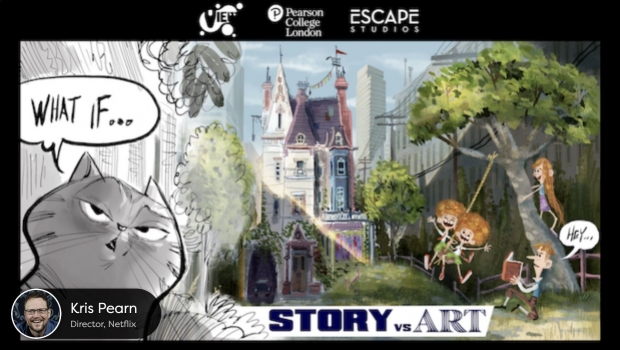 During the session, Pearn will discuss ways in which the “what if” meets design, two parallel objectives hurtling towards the same goal: the audience. In animation, a pretty drawing cannot save a bad story, and a great story is invisible until drawings – some good and some bad – give it shape. Whether it’s a sketch, a painting, or a sculpture, art is the soil that warms life into the seed of story.

Pearn, born and raised in Canada, has been making cartoons for both film and television since graduating from Sheridan College. His credits include Open Season; Surf’s Up; Arthur Christmas; Shaun the Sheep; Pirates: Band of Misfits; and Home. He was head of story on Cloudy With A Chance of Meatballs, and co-directed Cloudy Two. Most recently, Pearn wrote and directed the Netflix animated feature The Willoughbys, based on the novel by Lois Lowry. He has been nominated for several Annies, teaches when possible, and has given a Ted Talk called “The Optimistic Opportunity of Failure.” He still loves to draw.

Walker has been working at the interface between the animation, computer games, visual effects, and higher education. His mission is to produce better quality talent to feed the UK's creative industries. He has been authoring and updating the well-respected “Core Skills of VFX Handbook” and “Student Primer.” As a member of Access: VFX, Saint has worked on a few projects to encourage more diversity and inclusion in visual effects and animation.

Tickets are registration are available via the VFX Festival Virtual Series website.