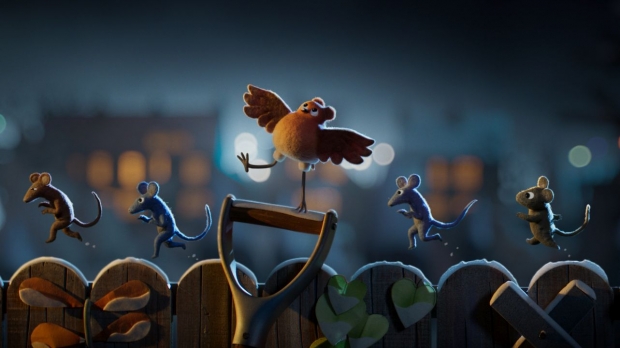 The Robin Robin panel will bring together writers/directors Dan Ojari and Mikey Please, alongside executive producer Sarah Cox and Aardman co-founder Peter Lord. The team will discuss their creative journey and share secrets about the innovative techniques they used to bring the musical world of Robin Robin to life.

In Robin Robin, a young robin is adopted and raised by a family of mouse burglars. Growing up, she plans a spectacular heist to prove her worth, only to find herself on an uplifting journey of self-discovery. The animated special will be released on November 24, 2021, on Netflix. VIEW takes place October 17-22 online and in-person in Turin, Italy. The international conference is Italy’s premiere event for animation, VFX and computer graphics, where industry professionals, students and enthusiasts are invited to enjoy an inspiring week of talks, presentations, and workshops. In addition, online access opens this year’s event to a global audience.

“Every time an Aardman film comes out, I know it is going to be amazing,” commented conference director Dr. Maria Elena Gutierrez. “In addition to its beautiful new design aesthetic, Robin Robin is sure to warm all our hearts with Aardman’s unique brand of character-driven comedy. I am so proud to welcome Peter Lord and his creative team to VIEW Conference 2021, and so excited to hear what they have to say about their latest achievements.”

Dan Ojari (writer/director) - A graduate of Wimbledon College of Art, Ojari began his career as a freelance animator, set designer and model maker, before studying for an MA in Animation at the Royal College of Art. His graduation short Slow Derek screened internationally at over 40 film festivals and won the Grand Prix at Animated Encounters and Animayo. In 2014, Ojari co-founded Parabella Studios with Mikey Please, producing shorts, idents, and commercials. In 2019, Dan and Mikey joined Aardman to co-write and direct Robin Robin.

Mikey Please (writer/director) - After graduating from Wimbledon College of Art with a degree in Technical Arts, Please directed music videos, before studying for an MA at the Royal College of Art. His 2010 graduation short, The Eagleman Stag, won over 20 awards including a BAFTA for Best Animated Short, and was shortlisted for an Academy Award. In 2014, Please co-founded Parabella Studios with Ojari, producing shorts, idents and commercials, and later joined Cartoon Network as episode director on Elliott From Earth. In 2019, Mikey and Dan joined Aardman to co-write and direct Robin Robin.

Sarah Cox (executive producer) - Cox is responsible Aardman’s development slate across the company. Previously, she was the co-owner and director of award-winning production company ArthurCox, where she created and directed the BAFTA-nominated animation preschool series Nina Needs to Go! for Disney Junior. Her first stop-motion short, Don’t Let it All Unravel, made in conjunction with Aardman, won 11 international film awards including the Grand Prix at Tricky Women in Vienna 2008.

Peter Lord – (Aardman co-founder and creative director) - Lord co-founded Aardman with David Sproxton in 1972. Lord has earned multiple Academy Award and BAFTA nominations as a director for films including Chicken Run and Wallace & Gromit: The Curse of the Were-Rabbit. Since their early success in the 1970s with the clay character Morph, Lord and Sproxton have built Aardman into one of the world’s leading model animation studios.