VIDEO: Bringing the 2D Aesthetic of Peyo to the CG World of ‘Smurfs: The Lost Village’ 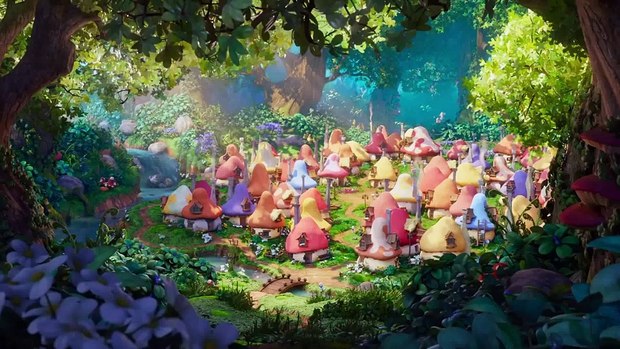 In Smurfs: The Lost Village, Sony’s latest installment in the much-beloved franchise directed by Kelly Asbury and produced by Jordan Kerner, a mysterious map sets Smurfette and her best friends Brainy, Clumsy and Hefty on an adventure through the Forbidden Forest filled with magical creatures to find a mysterious lost village before the evil wizard Gargamel does.

The movie features the voices of Demi Lovato as Smurfette, Rainn Wilson as Gargamel and Mandy Patinkin as Papa Smurf, alongside Jack McBrayer (Wreck-It Ralph) as the sweet, awkward and honest-to-a-fault Clumsy, Danny Pudi (Community) as book smart and geek proud Brainy, and Joe Manganiello (True Blood, Magic Mike) as the strong and super-positive Hefty.

Produced for a relatively modest $60 million, Smurfs: The Lost Village arrived in U.S. theaters this past Friday, landing a third place domestic debut at the box office with $13.2 million. The fully-animated feature has fared better overseas, where it opened a week earlier, bringing in $42.1 million from 58 international markets for a total of$56.1 million globally.

Smurfs: The Lost Village is a gorgeous feast for the eyes with truly stunning production design chock-full of colorful and engaging details. The CG-animated film includes graphic 2D elements that echo the visual style of the original comics created by Belgian artist and illustrator Peyo.

Courtesy of Sony Pictures Imageworks, here’s a new video with VFX supervisor Mike Ford that provides insight into how the visuals for Smurfs: The Lost Village were developed, recounting the efforts that went into translating the 2D aesthetic of Smurfs creator Peyo to the 3D world of the film. Check it out in the player below: