Wrapping the V&A’s ‘Clangers, Bagpuss & Co. Smallfilms’ exhibition, September 24 celebration of the art of stop-motion animation to include a talk from leading puppet maker Ian Mackinnon of Mackinnon & Saunders. 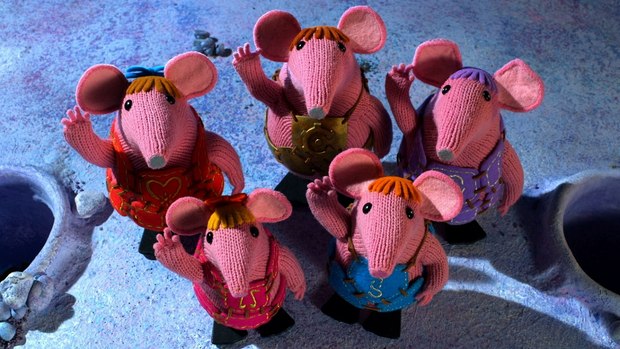 To mark the final weeks of its Clangers, Bagpuss & Co. Smallfilms exhibition, the Victoria & Albert Museum will be presenting a nostalgic celebration of the magical art of stop-motion animation. The all-day event, to be held on Saturday, September 24, will include talks from academics and leading puppet makers on the fascinating history of animation. Attendees can have a go at creating moving images themselves with zoetropes and magic lanterns inspired by the wonderful early childhood entertainments from the Museum’s collections.

See below for program highlights:

From matches to maquettes to multi-plane cameras, animation has been made from many hidden objects; objects embedded with their own stories and memories. This lively talk will take into account 100 objects...or thereabouts. Showing how the very history of animation has been built on its materials and crafts. Puppets, pin screens, paint, pencils and pixilated people have all contributed to making some of the greatest animated films across the world, and yet their contribution to cinema and social history is often forgotten. This discussion will re-animate those objects and bring to life their magic and mystery.

Wells is Director of the Animation Academy at Loughborough University and has published widely in the field of animation, including his latest books, “Animation, Sport and Culture” and “Fundamentals of Animation” (2nd Edition). He is also an established writer and director for film, TV, radio and theatre, and conducts consultancies and workshops worldwide based on his book, “Scriptwriting.” He is Chair of the Association of British Animation Collections and is currently working on a feature film script.

While they remain powerfully present in national popular memory, through television’s remembering of its own history, as well as via fan websites and, now, remakes, the programs made by Smallfilms in the 1960s and 1970s are still remarkably absent in scholarship. While programs such as Clangers (1969) and Bagpuss (1974) often make it into nostalgic, celebratory volumes looking back on television’s past, historians of both television and animation as wider fields have consistently ‘forgotten’ the programs of Postgate and Firmin’s Smallfilms. In this contribution to the day, Dr. Moseley will explore the reasons for this “forgetting” of children’s television stop-frame animation across the academy and argue for the importance of writing this body of highly innovative, imaginative and experimental work back into histories of both children’s television and animation.

Dr. Moseley is Director of the Centre for Television History, Heritage and Memory Research in the Department of Film and Television Studies at the University of Warwick. She has published widely on popular television and film, with a particular interest in questions of history, address and representation. She is the author of Hand-Made Television: Stop-Frame Animation for Children in Britain, 1961-1974 (Palgrave, 2016) and is writing a book on questions of region and landscape in film and television through a case study on Cornwall.

Tichborne and Postgate will talk about their experiences and creative processes in the re-making of Smallfilms’ classic animation. The award winning new series brings back to life the lovable knitted characters of 1969. Combining distinctive knitted puppetry with stop motion animation, the enchanting and curious creatures will come bounding back into our lives with their unique approach to exploration, imagination and invention. The new series of Clangers revisits original themes such as caring for the planet and the importance of community.

Tichborne is the Studio Director at Factory Create and is one of the co-directors of the award winning new Clangers series. He has worked as Animator on classic films such as Coraline and Fantastic Mr Fox as well as the new series of The Wombles. Postgate worked as a newspaper cartoonist before becoming a children’s book author and illustrator. His book ‘Smelly Bill’ won both the Nottingham and Norfolk Children’s Book Awards. He now works as a scriptwriter for children’s TV, including the 2015 relaunch of Clangers.

One of the world’s leading puppet makers, Mackinnon will share his experiences about his journey into puppet making and animation, exploring the importance of practical skills and creativity in the industry. Hear about his trickiest model-making projects and the work he is most proud of, and get a chance to meet some of his wonderful creations.

After leaving school, Mackinnon developed his puppet-making skills working for legendary TV producer Gerry Anderson. In the late 1980s, Ian met his business partner-to-be Peter Saunders at Cosgrove Hall Productions, where they worked together in the puppet department.

While at Cosgrove Hall, Mackinnon also collaborated with animator Paul Berry on The Sandman. This chilling stop-motion short film earned an Oscar nomination and has become a classic which features in the British Film Institute’s educational program.

At the start of the 1990’s, Ian and Peter set up Mackinnon & Saunders, now one of the world’s leading companies in character development and stop-motion puppet making.  Over the last 20 years, Mackinnon & Saunders have worked on many children’s TV shows including Wind in the Willows, Postman Pat, Bob the Builder, Pingu, Strange Hill High, Rastamouse, Raa Raa the Noisy Lion, and the new Clangers.

Sandra Kerr will explore, with live illustrations, the origins of some of the songs and instrumental music accompanying the Bagpuss films: the 13th Century roots of the mouse round, the tweaking of traditional rhymes, the improvised tunes played to Postgate & Firmin’s comic strips, and more.

Kerr is an English folk singer. She sings and plays English concertina, guitar, Appalachian dulcimer and autoharp. She was a member of The Critics Group from 1963-72. With John Faulkner she wrote the music for the TV series Bagpuss and voiced the character of Madeleine Remnant (the rag doll). Kerr has been involved in many programs for BBC Radio including The Music Box and Listening Corner.

More recently she has been singing with her daughter Nancy Kerr (whose father is Ron Elliott, a Northumbrian piper) and in the groups Sisters Unlimited and Voice Union. Her work has developed to include teaching and leading workshops and she is the director of two folk choirs, Wercasfolk and VoiceMale.