Renown animation and VFX specialist whose career includes work on iconic movie franchises like ‘Star Wars’ and ‘Pirates of the Caribbean’ will share insights from the visual effects on ‘The Mandalorian’ Season 2; free live online event coming September 4. 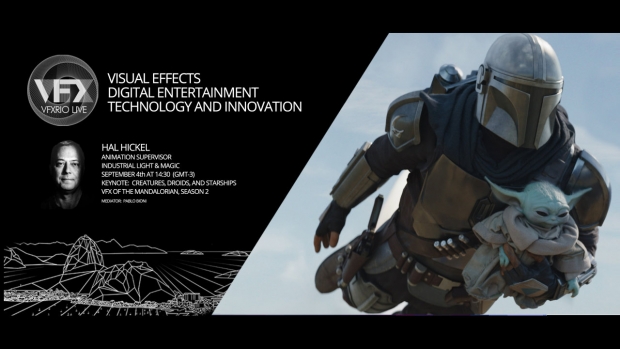 VFXRIO brings to Brazil the leading national and international specialists in the production of visual effects for cinema and TV, games, and new technologies. The event’s programs include lectures and workshops with supervisors, directors and artists who create of visual effects and immersive media.

Next up, VFXRIO is offering a free online presentation by Industrial Light & Magic's Hal Hickel, animation supervisor for The Mandalorian. He will discuss how the visual effects of Season 2 were created, including the making of some of the most iconic characters in the series, such as Baby Yoda (Grogu) and Krayt Dragon. The event will not be recorded and will only be available live on September 4 at 1:30 PM EST.

"George Lucas' Industrial Light & Magic was the first production company to create visual effects on a large scale,” commented VFXRIO director Matteo Moriconi. “Hal Hickel will reveal how the visual effects of Season 2 were created, including some of the most iconic characters in the series such as Baby Yoda (Grogu) and Krayt Dragon. Star Wars is the seminal universe for an entire industry. The presentation will not be recorded and will therefore be unique. Sharing know-how at this level allows us to fulfill our mission and help an international community of artists and VFX specialists.”

Hickel joined Industrial Light & Magic in 1996 as an animator for The Lost World: Jurassic Park. He progressed to lead animator and was responsibility for the animation of several characters in Star Wars: Episode I - The Phantom Menace.  In 2000, he was promoted to animation supervisor, teaming up with multi-Academy Award winning visual effects supervisor Dennis Muren on Steven Spielberg’s A.I. Artificial Intelligence. His special interest in animation lies in the challenge of integrating fantastic characters and creatures into live-action films.

Participation is free; the event will be in English and Portuguese. Program information is available here.