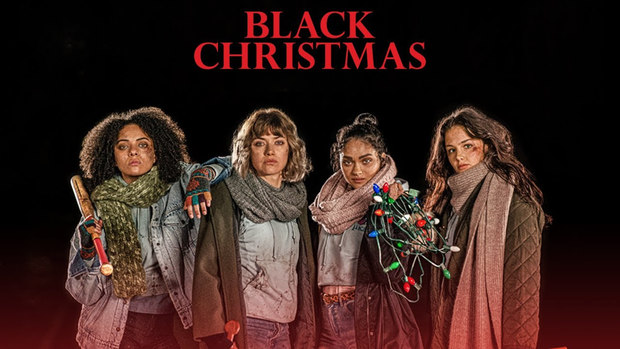 VFX Legion has just shared with AWN a breakdown reel that highlights some of their work on Blumhouse Productions’ holiday horror film, Black Christmas. With a team led by VFX supervisor James David Hattin, the L.A. / B.C. – based visual effects house was tasked with handling all the film’s visual effects, from fabricating CG snow and other digital elements, to enhancing the supernatural villain’s menacing look.

Black Christmas tells the story of a group of sorority girls who are being stalked and killed off, one-by-one, by a masked stranger during Christmas break. Refusing to be victims, coeds Riley Stone (Imogen Poots) and her Mu Kappa Epsilon sisters decide to fight back and put an end to the rampage of terror.

Shot in New Zealand, The University of Otago was transformed into the fictitious Hawthorn College in small-town America. Realistic snow, critical to the film’s seasonal setting, was fabricated practically during the production but fell short of the authentic look director Sophia Takal envisioned. VFX Legion digitally transforming the exterior footage into a realistic winter-white environment.

“We created snowflakes with variations in size and animated them to fall in a very art directed way to match the practical snow,” Hattin shares. “Our artists fabricated high-resolution, 3D snowflakes using Nuke’s advanced particle system.  The color of the flakes was adjusted to compensate for lighter and darker backgrounds."

"Our biggest challenge was finding a look that blended with the practical snow to create seamless final shots with a real-world feel,” Hattin adds.

Early on, it became clear that the human-looking supernatural villain needed a more demonic look, though his overall appearance had to remain grounded in the real world.  Legion added a subtle reddish glow to the killer’s pupils; developed by the director and editor, the effect gave the antagonist a distinctly evil look, clearly differentiating him from the general population.

A variety of CG elements were created to augment the original footage. In one scene, the masked man shoots a computer-generated arrow that virtually flies across a room as the girls flee. The arrow was designed based on reference photos using Maya, which was also used to light and animate the look and velocity of the projectile. Tracking artist Ruy Delgado matched the stunt arrow’s trajectory with the camera moves.

The reign of terror ends when a girl pushes over an ancient statue containing a “black goo” that is the source of the villain’s otherworld powers. Using Maya’s Bifrost, Legion’s artists simulated the liquid sludge splashing out of the head of the effigy as it shatters into pieces.

"Over the years, Blumhouse Productions has called on Legion to create the visual effects for a long roster of thrillers,” Hattin notes. "Our team appreciates the opportunity to work in the horror film genre. We really enjoy coming up with innovative solutions that meet the challenge of enhancing the realism of scary scenarios.”

According to Legion’s VFX executive producer Reid Burns, "For Black Christmas, we assembled a team tailored to the film’s specific needs from our global network of highly skilled artists. Our ability to quickly ramp up Legion’s collective of talent enabled us to deliver a large number of high-quality visual effects that the movie required and meet its tight deadline.”