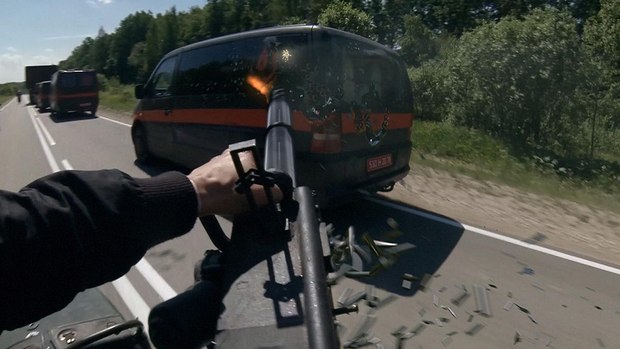 Hardcore Henry is anything but subtle. Sit through its blistering, adrenaline-fueled runtime and you’ll witness shootouts in Russian brothels, highway chases through red-hot explosions, blue-sky free falls from thousands of feet above sea level. But what makes this different from any other thrill-packed action movie is that this time you witness all of the unfolding events from inside the head of the protagonist. To put it another way -- you are Hardcore Henry.

Debuting at the Toronto International Film Festival (TIFF) last fall to rapturous acclaim from action fans, Hardcore Henry takes place inside the skull of the titular Henry, who awakens in a blimp with his limbs and physical make-up now augmented by cyborg implants. Henry’s beloved wife is then kidnapped, and the next two hours are spent in an explosion of violence as Henry and his sidekick (played by Sharlto Copley) shoot, smash, and gouge their way from one fight to the next.

It’s a somewhat overused term, but absolutely apt in this instance -- Hardcore Henry’s first-person perspective is truly visceral. When Henry takes a pair of pliers to a villain’s face, you’ll see it like you’re twisting the tool yourself; likewise, when Henry is knocked off a bridge and sent crashing down into a parked car below, you’ll feel the nauseous adrenaline as gravity works its magic. It feels more like you’re living through the film, rather than merely watching it.

Adding another layer of immersion is the conceit that Hardcore Henry is one long, unbroken cut. Of course, having no edits in a film that includes highway chases, shootouts, and 1 versus 100 hand-to-hand battles is impossible.

As such, director Ilya Naishuller turned to VFX Legion to tackle some elements of what would prove to be an enormously challenging task. From stitching together cuts to working around the complexities of GoPro footage, Legion needed to exercise a great deal of subtlety in a film that is otherwise anything but. The easily-mounted action-camera brand GoPro has democratized the process of shooting amazing first-person footage. GoPro’s clear, in-the-moment video enabled Hardcore Henry director Naishuller to prove the FPS action movie was possible with his Biting Elbows music video, and then to create Hardcore Henry itself on a relatively modest crowd-funded budget. But when it comes to the complex world of visual effects, the resulting output from GoPro cameras can be challenging to manipulate after the fact.

“GoPro is a great format -- I can’t speak enough of it for sports and such,” says Legion creative director James Hattin. “But Hardcore Henry is a nearly two-hour film that’s shot in the first-person point of view, and the GoPro is the unblinking, fairly shaky, widely distorted eye of the viewer.”

The footage received from GoPro cameras appears squeezed together due to the wide-angle lens, and it comes with a lot of distortion: things are big in the middle, but then smaller and warped along the edges. Were this a documentary, that wouldn’t necessarily be a problem, but Hardcore Henry features a great deal of visual enhancements, ranging from the addition of arterial spray to removing safety ropes and even implementing a CG blimp.

To work with the footage, Legion first had to un-warp it. “This results in a flat scene that looks like a giant, stretched, four-legged starfish,” Hattin recounts. Using this new layout, Legion’s artists were able to implement visual effects as normal. To complete the process and maintain the spirit of the original shooting style, they then had to re-warp the footage, once again making the image and everything in it -- including any CG blimps -- look as if it were shot in-lens with the GoPro.

“You’re always going to have a little spherical bending, just because that’s the nature of how light comes through a lens, but with a GoPro it’s so extreme,” Hattin explains. “Every tracking task that would take an hour or two on a regular piece of 20-50mm footage takes five or six hours to try and solve. It really was a hugely complex task, but Legion’s artists approached it with intelligence and skill.” Dealing with Hardcore Henry’s uncommon video format wasn’t the only curveball thrown Legion’s way. Even implementing bread-and-butter VFX such as motion blur and dissolves were trickier to pull off with the lightning-fast pans of the first-person perspective.

“When you’re working on a movie like this, the difficulty of everything is increased two-fold,” says Hattin. “There’s no task or shot that doesn’t demand a different way of thinking; a different approach to tackling it as compared to a more traditional action movie. That’s why we need the best artists, and thanks to Legion’s remote model, we have access to them.”

Beyond its headquarters in Burbank, Los Angeles, Legion relies on dozens of artists spread across the world, each with unique specializations and talents. When a large project like Hardcore Henry comes in, Hattin and the home crew can enlist their proven international allies and scale quickly to deal with challenges and additional requests.

That scalability not only makes Legion an ideal fit for productions with a tighter budget -- such as was the case with Hardcore Henry -- but it also allows them to quickly increase their ranks to deal with bottlenecks and unforeseen difficulties without slowing anything down on the client side. That proved incredibly handy when the GoPro footage required a lot more attention than anticipated.

“Hardcore Henry was a wildly global production,” says Hattin. “We had motion tracking experts in Australia, New Zealand and Germany; artists in Los Angeles and Canada; compositors from all corners of the globe. It was a huge effort by everyone -- one that enabled Legion to meet each and every of Hardcore Henry’s challenges.” Legion’s worldwide talent pool tackled 70+ shots across Hardcore Henry. Many of these were in aid of the film’s blistering non-stop pace: Legion needed to help support the illusion that the entire film is experienced in one long take, rather than numerous shorter takes stitched together in post.

“The ideas of the film is [that] it’s all in real-time -- you’re seeing each event as it happens with no cuts,” explains Hattin. “We had to work on these really insane cuts -- working with numerous long, first-person takes and finding a way to seamlessly blend them into one shot.”

That was the case for one sequence set in a rundown apartment complex. A previous version of the shot completed for the TIFF screening, delivered by another VFX vendor, had blending issues, wherein the lights doubled up for ten to 15 frames. Legion was asked to revisit the shot for the final cut of the film and find a way to merge two different shots into one perfect, single shot.

“This was a shot we had seen in very early edits. Like a lot of the movie, many takes had to be seamlessly stitched together as one contiguous piece of action. In this particular shot, the cameras never quite line up, so the lights hanging from the ceiling would double up as we switched between takes. As the camera pans we found a way to morph seamlessly between the two shots, ensuring there was never a break,” explains Hattin. “We also had to remove some crew members from the background.”

Elsewhere, Legion had the tough task of applying its VFX expertise to a shot in which Henry jumps off of a five-story building and into a dumpster. Obviously, the real shot wasn’t so reckless: the actor wearing the GoPro was affixed with safety harnesses, which needed to be removed in post. Legion’s job was in digitally erasing the multicolored ropes, and then once again blending the multiple cuts into one continuous sequence.

“It’s all happening so incredibly fast your brain can’t really process what it’s seeing, but if something is wrong your subconscious will notice it!” says Hattin. “That’s why it’s important to take time and care removing each and every one of these elements that can pull viewers out of the heady experience that is Hardcore Henry. You want them to be locked into it. It’s such a crazy movie, I can’t imagine how people didn’t get killed making it!”

Legion’s work on Hardcore Henry impressed Naishuller so much that he asked the team to tackle more shots than originally assigned. In one case, Naishuller didn’t love the look of the blimp and surrounding clouds made by another vendor for the TIFF screening, so he asked Legion to reimagine it all.

Elsewhere, Legion’s attention to over-the-top detail in adding blood spatter and muzzle flashes throughout shootouts earned the team an honorable designation: the director asked them to put their stamp on other scenes and to do it “in Legion style.”

“Ilya was really happy with our work, so we started picking up small sequences and shots that the production just wasn’t happy with, and they said, ‘Make it look like Legion’s stuff!’” beams Hattin. “That’s our ability to go a little over-the-top in gunplay, muzzle flashes, and hits. It wouldn’t be fitting for every movie, but this movie is extreme, and we have artists that can do that really, really well.”