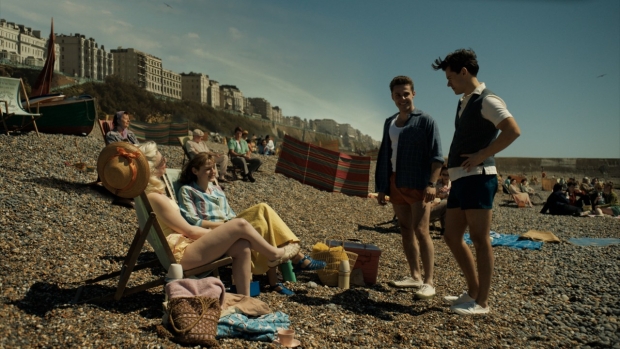 The romantic drama, My Policeman, based on the 2012 Bethan Roberts novel of the same name, follows the decades-long relationships and emotional journeys of three people: Tom the policeman (Harry Styles/Linus Roache), Marion the teacher (Emma Corrin/Gina McKee), and the museum curator, Patrick (David Dawson/Rupert Everett). Directed by Michael Grandage, the story unfolds across two timelines, with the audience discovering how the events of the characters’ youth determine their relations in old age.

In March 2021, when BlueBolt held initial conversations with the film’s director, it was clear that the authenticity of the locations and the periods portrayed were essential. Consequently, the VFX studio, working as the sole VFX vendor, was tasked with removing anything inaccurate to the film’s chronology as the timeline moved between Brighton Beach in the 50s and early 90s.

In June 2021, when filming ended, the team shifted to post; Dunn noted, “We completed a few shots for a temp screening initially before getting into proper shot work.”

The project lasted about 13 months, from the first script read to delivery of the final shot, with shooting taking place at multiple locations in Brighton, including a few scenes filmed in Venice. The colorful 50s Brighton beach scenes were shot at the quieter Newhaven beach, with Digital Matte Painting used to add period corrections to the Brighton seafront and pier – then the beach was dressed out in VFX with additional beachgoers. “We set up hero look shots using a 2.5D workflow for DMP and plate integration,” explained Dunn. “A template for each sequence would be established on the hero shots and rolled out over the sequences. We did daily contact sheets for continuity as well as regular sequence reviews to track progress and continuity across the shots and sequences.”

The 90s setting needed a light touch of VFX to help achieve continuity of overcast skies and drizzle to set the mood – accomplished with a mixture of plate photography and DMP work.

Check out BlueBolt’s My Policeman VFX Breakdown and see where the team worked their VFX magic:

Bluebolt - My Policeman VFX Breakdown from BlueBolt on Vimeo.

My Policeman is available to stream on Prime Video.