For VES Winners, a Night of Emotion and Renewed Purpose

AWN’s Max Weinstein reflects on last week’s VES Awards ceremony, an evening filled with excitement that nevertheless marked another rough, taxing year for visual effects artists, the industry, and the world at large. 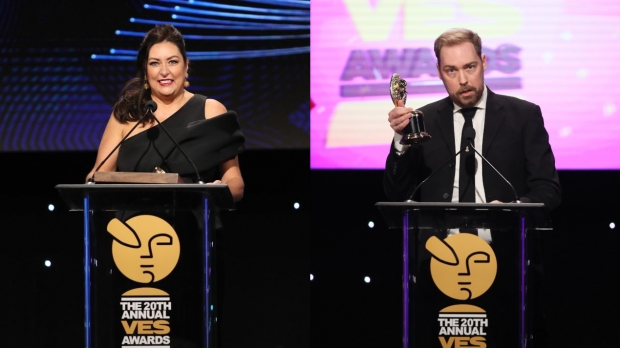 As I waited for the 20th annual Visual Effects Society Awards to begin, a man walked through the doors of The Beverly Hilton Hotel and asked if I was there for the ceremony. When I told him I was, a jolt of energy surged through him as he blurted out, “Me too, and I am pumped! I am amped!”

That sense of unbridled excitement permeated the entire event -- a night that signified a brighter future for VFX craftspeople across the world after two years of pandemic-induced roadblocks stunted their productions and long barred them from attending celebrations such as this.

“You all went through a lot to get to tonight,” said VES executive director Eric Roth as the ceremony began. Those simple words rang truer, and hit harder, this year than they ever have.

Indeed, Namit Malhotra - chairman and CEO of DNEG, whose work on Dune, Last Night in Soho, and other projects led to seven VES award wins - stressed in a statement just how taxing the studio’s most recent work has been.

“It’s important to note that these projects were all in production during the pandemic,” Malhotra said. “Despite the challenges of finding new ways of working in this incredibly difficult time for the world, DNEG has produced work of a quality that has been recognized as outstanding by the VES -- an industry body that provides a detailed and comprehensive gauge of the technology and artistry that makes this work so special. This, alongside the unprecedented number of awards that we won, is a massive testament to the capabilities of our teams.”

Framestore took home four VES awards by the end of the night -- a feat that its CEO, Sir William Sargent, said was a testament to the studio’s versatility.

“This year’s nominations spoke to the tremendous breadth of Framestore’s work and the incredible talent of our artists, producers and technologists,” Sargent said. “Walking away with four awards across film, advertising, and rides is a brilliant achievement, showcasing not just the incredible variety of projects we work on but also our capacity to deliver show-stopping work for every possible client or venue.”

As more award winners were announced, a potent mix of other emotions poured over: elation, determination, hope, grief. Mentions were made of the sad passing of Douglas Trumbull and Bill Taylor, as well as the tragedy continuing to play out in Russia’s horrific invasion of the Ukraine. But throughout, rowdy, sometimes raucous applause for the winners was always close at hand.

When Disney Animation supervisor Michael Woodside accepted the award for Outstanding Virtual Cinematography in a CG Project (Encanto) on behalf of his collaborators, he told guests of the bittersweetness of his nomination: He found out about it on the same day that his father passed away. When EVP/general manager of Lucasfilm, Lynwen Brennan, received the VES Lifetime Achievement Award, she implored industry members to better acknowledge the human faces behind all feats of technical wizardry. “I would love to take this moment to push for the recognition [we] deserve,” Brennan said. “Entertainment wouldn't be the same without the people in this room, yet so often, we are anonymous. And there's such a shroud of mystery over what we do that it’s enticing to lean into that mystery and not spoil the trick… like there's a big computer with a giant visual effects button on it, and out comes the magic. But it's people that make up the visual effects business -- not magicians, not machines, but very hardworking people who put their hearts and souls and so, so many long hours into their craft. That's why we give awards: to celebrate people and elevate the understanding of our craft.”

A founder of the Parallax VFX companies that provided software for ILM, Brennan recalled her experience seeing Jurassic Park as a transformative career moment. “From the moment I saw the brontosaurus walk across the screen, I knew I had to work at ILM one day,” she said. Eventually, she got to do just that, when ILM vet and Parallax collaborator Cliff Plumer took a chance on her all those years ago.

Camille Poiriez, Arielle Cohen, Eloise Thibaut, and Louis Florean, the emerging artists behind Green, won the award for Outstanding Visual Effects in a Student Project. And after taking their prize backstage, they were met by ILM head Rob Bredow, who gave them an opportunity to introduce themselves and come away with his business card.

Yes, the competition in their chosen field may be as cutthroat as it gets. But on this most optimistic of nights, it was only right that they get to inch closer toward the dinosaur-sized dreams of their own.