The Visual Effects Society is not amused about the catty comments presenters James Corden and Rebel Wilson made towards VFX artists at the 92nd Annual Academy Awards. 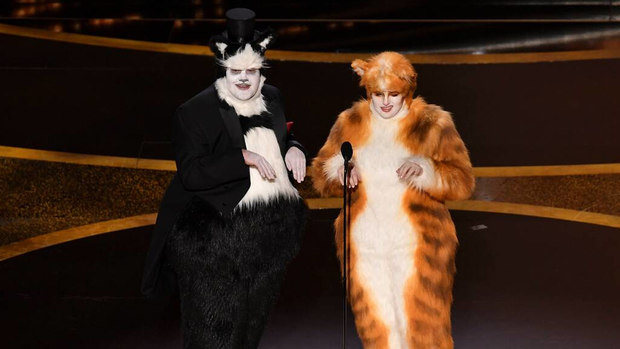 Me-Ouch! James Corden (Into the Woods, Trolls) and Rebel Wilson (Pitch Perfect, Brides Maids) stepped out in furry feline costumes at the 92th Annual Academy Awards last night, and the Visual Effects Society is not happy about it! The catty actors made snide remarks about the visual effects of Cats, insinuating the widely panned musical, which they starred in, did badly because of sub-par visual effects. In an official VES statement released this afternoon, the organization claimed that, “the best visual effects in the world will not compensate for a story told badly,” and “it demeaned the global community of expert VFX practitioners doing outstanding, challenging and visually stunning work.”

The VES is not the only aggrieved party; many VFX artists took to Twitter to express their ire at Corden and Wilson’s hurtful words.  Academy Award-winning animation director Hal Hickel wrote, “Once again the Academy finds a way to insult VFX artists. Usually it’s a dumb joke about 'geeks or nerds,' this year it was a dumb joke implying the failure of Cats was poor VFX.” According to Variety, the Academy has made no official statements regarding the issue. What do you think? Was the skit funny, or downright uncalled for?

You can find the entire VES statement below:

The Visual Effects Society is focused on recognizing, advancing and honoring visual effects as an art form – and ensuring that the men and women working in VFX are properly valued.

Last night, in presenting the Academy Award for Outstanding Visual Effects, the producers chose to make visual effects the punchline, and suggested that bad VFX were to blame for the poor performance of the movie CATS.  The best visual effects in the world will not compensate for a story told badly.

On a night that is all about honoring the work of talented artists, it is immensely disappointing that The Academy made visual effects the butt of a joke.  It demeaned the global community of expert VFX practitioners doing outstanding, challenging and visually stunning work to achieve the filmmakers’ vision.

Our artists, technicians and innovators deserve respect for their remarkable contributions to filmed entertainment, and should not be presented as the all-too-convenient scapegoat in service for a laugh.

Moving forward, we hope that The Academy will properly honor the craft of visual effects – and all of the crafts, including cinematography and film editing – because we all deserve it.