The student team behind the award-winning short A La Française skewer history with the help of Chaos Group’s V-Ray. 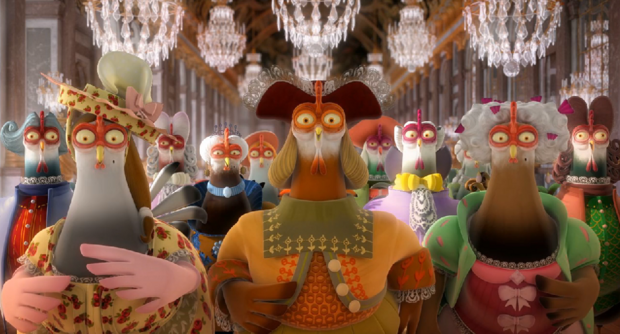 Playing off expectations is one of the oldest tricks in comedy. If an audience sees Louis XIV-era France as a place filled with exquisite architecture and opulent wealth, then that’s fertile ground for a joke. Especially when it’s shaped like a chicken.

The student team behind the award-winning short A La Française decided to skewer history with a graduation piece that found comic gold in asking a farm bird to be proper. Sword-happy sentries, randy lords, and well-mannered ladies who may or may not be able to contain their chickenly urges populate an animated world that is both vivid and intricate. Colors are vibrant, costumes are packed with embroidered details, and the wordless vignettes play off real-life situations recounted by the famous French playwright, Molière.

So how did this group of ambitious Supinfocom students re-create their version of 1700 Versailles? They turned to V-Ray.

Looking back, their demands weren’t revolutionary; they wanted speed, simplicity and final frames that could match what they saw in their minds. Julien Hazebroucq, the lighting and rendering lead, decided to build their pipeline around V-Ray. Five years of experience made him confident that wherever this idea was heading, V-Ray could help them bring it out.

“V-Ray can be very fast, to the point where you can end up with a lot of leftover time for more animation and details,” said Hazebroucq. “Each iteration makes your film better so anything that can bring you back to the process is a blessing.” With Global Illumination (GI) turned on, the team was able to walk that fine line between cartoon and realism. As color played a big role in their vision, V-Ray’s GI came in handy as it allowed the artists to bounce environmental color light onto their character’s clothing. A wooden floor quickly became an accentuator at court, while a blue sky became a cooling agent in the garden.

“GI helped us do a lot with a little,” added Hazebroucq. “In the reverence scene our only light source was the windows, which was challenging since we had to light a packed hall full of characters wearing colorful attire as well as a mirror reflection. A combination of GI and V-Ray Sphere Fade was all we needed to do it though. It worked with what we had and made it look great.” V-Ray Sphere Fade proved important to the team since they wanted to avoid camera movement. Every shot was fixed, which meant that they had to only render their character to save time. On the reverence scene this meant only moving characters, which could be accomplished since V-Ray Sphere Fade allows artists to define where they want V-Ray to render.

With some resourceful thinking and V-Ray on hand, more time-consuming processes like real hair simulation could be traded out for wig work completed with the help of V-Ray’s displacement mode. “We honestly didn’t have time to create a full head of hair for each chicken, so we had to think on our feet. V-Ray’s displacement mode provided great detail and a fun shape that tied to the amusing faces our characters were making,” recalled Hazebroucq. Those faces are probably part of the reason the film has been such a smash hit since its release. Already a grand prize winner at SIGGRAPH 2013, A La Française has also won 12 other awards or honorable mentions in film festivals across the US, Europe and Asia.

“As a symbol of France, the rooster is a perfect instrument,” said Hazebroucq. “What can be elegant and proud, can also be ridiculous and foolish, not unlike those luxurious nobles in the palace of Louis XIV. In order to achieve such a A La Française (French) movie, these two elements had to come together. We’re just glad we had V-Ray there to make it look right.”