Award-winning short film directed by Robert Grieves to be released on Vimeo on November 3. 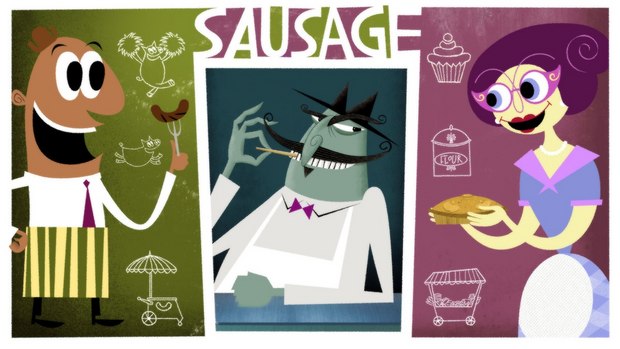 UPDATED: Sausage is now online! Watch it in the player below:

With the Academy preparing to announce its shortlist for Best Animated Short, Sausage, one of this year’s Oscar hopefuls premieres online next week, November 3rd. After a successful festival circuit accumulating eight international prizes and consideration in the upcoming Oscar race, this independent production by London based director Robert Grieves will finally be available for all to see. The film’s release coincides with ‘British Sausage Week’; a decision Grieves hopes will help maximize its reach and tap into the wider social consciousness. The film has already proven its broad appeal, delighting packed family audiences across the world, as its themes of social satire and sexual innuendo completely miss the children while connecting perfectly with the adults.

Grieves started the short film as a way of readdressing the overly commercial direction his work had taken, giving him complete control over concept, development and results. It also allowed him to explore narrative and character to far greater depths, and it’s those aspects of the production that gave Grieves his biggest challenges and achievements. Sausage tells of the battle between two artisan market sellers and a slick new fast food vendor, a metaphor for the supermarket giants who threaten the future of local stores. Its combination of appealing retro design, highly topical issues and pure entertainment caught the attention of the British Council and the short film is now being shown in schools throughout the UK. Since Aug 2013, Sausage has been enjoyed by critics and family audiences at film festivals in over 50 locations across the globe, including Brazil, Australia, Japan, USA, Russia and Kazakhstan.