New theme park will include attractions created exclusively for China, plus Universal’s most popular theme park experiences from across the globe. 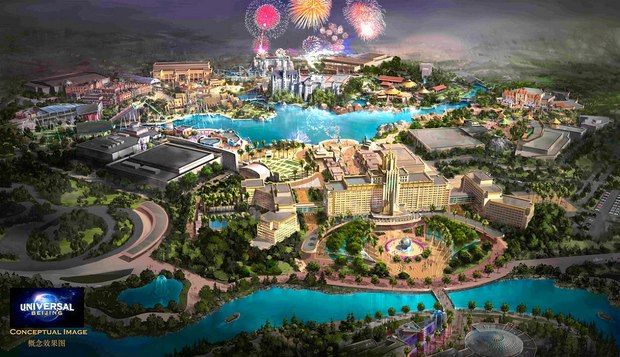 Following 13 years of negotiations and planning, Universal Parks & Resorts has announced that it will open a $3.3 billion, 300-acre theme park in Beijing sometime in 2019.

For more details, read the full press release, below:

Beijing -- Development of a world-class Universal theme park in Beijing has been approved by the Chinese central government. The theme park will include all-new attractions designed especially for it as well as some of Universal’s most popular themed entertainment experiences from around the world.

The overall investment in the Universal Beijing theme park will be more than 20 billion RMB. It will be jointly owned by Beijing Shouhuan Cultural Tourism Investment Co., Ltd. (BSH Investment), a consortium of four state-owned companies, and Universal Parks & Resorts, a business unit of Comcast NBCUniversal.

The Universal Beijing theme park and support facilities will occupy a 120-hectare (approximately 300-acre) site located northwest of the intersection of the Beijing-Harbin Expressway and the East Sixth Ring Road in Tongzhou District, Beijing. The theme park will be accompanied by a Universal CityWalk entertainment complex featuring multiple retail, dining and entertainment opportunities, and a first-ever Universal-themed resort hotel, collectively forming the core components of the resort. Additional phases are planned, with the resort eventually encompassing 400 hectares (approximately 1,000 acres).

“Chinese people love the movies and exciting entertainment, and we are proud to introduce China’s first Universal theme park and CityWalk, as well as the first Universal-branded hotel anywhere in the world,” said Duan Qiang, Chairman of Beijing Tourism Group and BSH Investment.

“Universal Beijing will showcase blockbuster movie themes and present entertaining family shows that will highlight the very best of popular culture. It will be a tourism crown jewel, not only for Beijing but for all of China, bringing extraordinary entertainment experiences to the Chinese people and to our guests from around the world. In bringing Universal to China, we will also share the best of China with the world,” Duan added.

“Universal Beijing will create a higher level of economic growth, understanding and cultural exchange between our two countries. Together, we will create a unique experience that spotlights hugely popular Western entertainment concepts as well as China’s rich cultural legacy. This will be an opportunity to build relationships with the Chinese people on a direct and personal level,” said Tom Williams, Chairman and Chief Executive Officer of Universal Parks & Resorts.

“We are excited to be working with our partners at Beijing Tourism Group and at BSH Investment, under the leadership of Chairman Duan, and we are thankful for the strong support of the Chinese central and Beijing municipal governments,” Williams added.