5 participants chosen for first-of-its-kind paid one-year program, in partnership with DreamWorks and Illumination, to develop underrepresented voices in film and TV animation through workshops, seminars, sponsorship, and roundtable discussions. 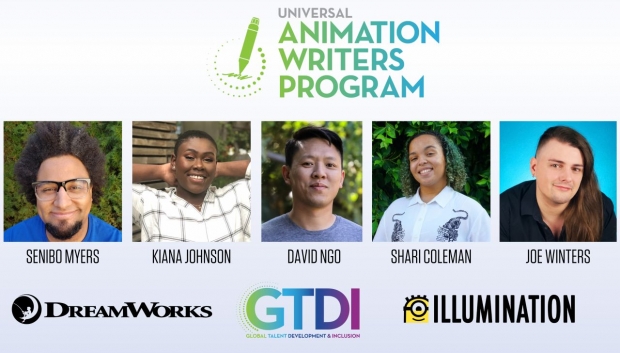 Universal Filmed Entertainment Group (UFEG) has announced a group of five writers selected to participate in the newly launched 2021 Universal Animation Writers Program, a first-of-its-kind animation writing program for both feature film and television content. The inaugural group of participants includes Shari Coleman; Kiana Johnson; Senibo Myers; David Ngo; and Joe Winters. These writers have each been selected for one of three Tracks within the program: a Film Track, or one of two Television Tracks geared towards a different audience demographic (Preschool ages 3-5 or Kids ages 6-11). The first cohort will collaborate closely with animation creative executives from DreamWorks Animation and Illumination as they develop materials in the one-year paid program.

The Universal Animation Writers Program, designed and executed by NBCUniversal’s Global Talent Development & Inclusion (GTDI) team, identifies, and develops an inclusive group of talent who can build upon the Studio’s commitment to telling stories with unique narratives that appeal to and reflect the vast diversity of its audiences. The program will provide professional development as well as an immersive experience of the Studio’s production process through workshops, seminars, sponsorship, and executive, filmmaker and showrunner led roundtable discussions. In addition to the partnership with DreamWorks Animation and Illumination, writers will have the opportunity to collaborate with business units and production entities affiliated with UFEG and NBCUniversal including Universal 1440 Entertainment, Universal Studio Group, and the Entertainment Group.

“DreamWorks has always been a place to build the dreams of unconventional heroes,” commented DreamWorks Animation president Margie Cohn. “This endeavor requires diverse voices from unique backgrounds. Thank you to the Global Talent Development & Inclusion team for building the Animation Writers Program and shining a light on underrepresented talent. We are excited to dig in and begin working with this promising group of writers.”

“Identifying and nurturing first time filmmakers and talent has always been a central pillar of Illumination’s process,” noted Illumination founder and CEO Chris Meledandri. “We look forward to collaborating with the extraordinary group of inaugural participants in the Animation Writers program to develop new and innovative animated projects.”