NBCUniversal partners with Feeding America in a three-tier campaign to help families in need this holiday season. 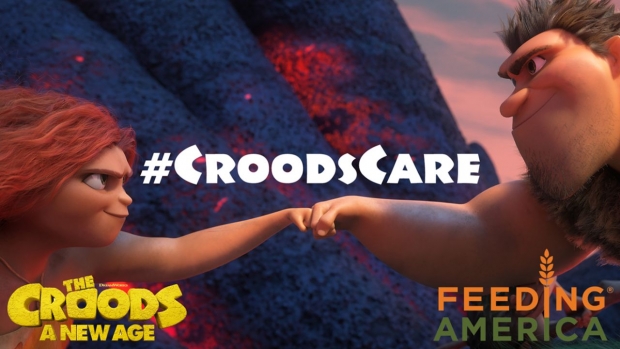 Universal City – In the leadup to the Thanksgiving weekend theatrical release of the new DreamWorks Animation comedy The Croods: A New Age (out Wednesday, November 25) Universal Pictures has teamed up with the nonprofit organization, Feeding America, as part of a three tiered campaign to help provide one million meals for families in need this holiday season.

Watch Ryan Reynolds, Emma Stone, Nicolas Cage, and the rest of the cast from The Croods: A New Age announce the partnership with Feeding America along with some Thanksgiving Etiquette tips!

Firstly, the Croods are all about being good neighbors. So, Universal is launching the #CroodsCare social initiative so fans can tweet and tag their neighbors or loved ones. For every tweet, Universal will donate to Feeding America. Every tweet using #CroodsCare between November 23 and December 31, 2020, will go towards providing up to 500,000 meals for families in need.

Thirdly, Universal will launch a “Virtual Fruit Drive” on Nintendo’s blockbuster online video game platform, Animal Crossing: New Horizons. Fans playing the game can donate a virtual piece of fruit to “Croods Cove” island, which allows players to explore the universe of The Croods: A New Age. (To access the island, players can use Dream Code: DA-1282-8266-2121.) Every virtual piece of fruit donated to the island between 11/23-12/31 will translate into real meals that Universal will donate to a family, up to 100,000 meals.

“We’re delighted to join forces with Universal Pictures and The Croods: A New Age to help alleviate hunger for so many families who are in need across our country this winter,” commented Feeding America, VP of Corporate Partnerships, Lauren Biedron. “In the wake of the COVID-19 pandemic and widespread unemployment, we estimate that more than 50 million people in America may not have enough to eat this holiday season. We’re grateful to Universal, DreamWorks Animation, and the tens of millions of Croods fans out there for helping us help our neighbors in need.”

“The Croods: A New Age is a film that celebrates the strength, power and importance of family, and it reminds us that the word ‘family’ extends far beyond the people we are related to,” added DreamWorks Animation president, Margie Cohn. “We are all part of a national family, a human family, and we need to look out for each other. We are happy to be able to join forces with Feeding America to help provide some security and comfort for the most vulnerable members of our American family this holiday season.”