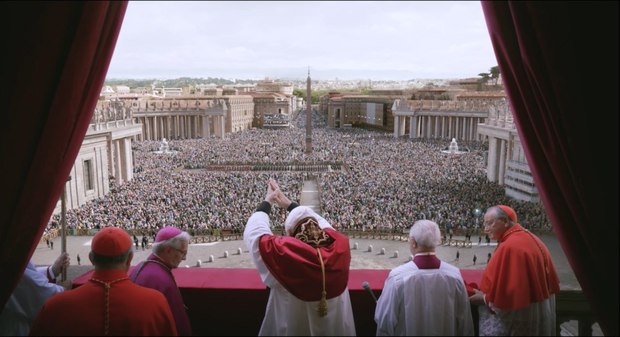 Union VFX has just shared with AWN a breakdown reel and synopsis of their work on the Netflix drama, The Two Popes. Directed by Fernando Meirelles (City of God), the film is an intimate portrait of one of the most dramatic transitions of power in the Catholic Church’s history. It stars Anthony Hopkins as Pope Benedict XVI and Jonathan Pryce as current pontiff Pope Francis.

First approached with the project in May 2017, Union, led by VFX supervisor James Etherington-Sparks, supervised visual effects over several months on location in Argentina and Italy. A large portion of the film takes place within the walls of Vatican City; as the Vatican was not involved in the film’s production, Union’s team had limited or no access to many Key Vatican locations.

Under the direction of production designer Mark Tildesley, various parts of the Vatican were replicated at Rome’s Cinecitta Studios, including a life-size, open ceiling, Sistine Chapel that took two months to build. The Union team lidar scanned everything available and set about collecting as much reference material as they could - photographing from a permitted distance, scanning the set builds and buying every photographic book they could lay their hands on. Working from this collection, the team built 3D models in Maya of St. Peter’s Square, the Basilica and the Sistine Chapel.

The Two Popes centers around two key Papal changes: in 2005 and in 2013. These events attracted huge attention, filling St. Peter’s Square with devotees eager to discover the identity of the new Pope and celebrate their ascension.  News crews from around the world camped out to provide coverage for audiences across the globe.

To recreate these scenes, the film crew shot at a school in Rome (Ponte Mammolo) with the same pattern on its floor as the famous square.  A cast of 300 extras were shot in blocks in different positions at different times of day, with costume tweaks including the addition of umbrellas; a library was then built to provide enough flexibility during post-production to recreate these pivotal moments at different times of day and in different weather conditions. Clear Angle was also used to individually scan 50 extras, providing additional options for the VFX team. The crowd scene was quite ambitious and challenging, as the filmmakers couldn’t shoot on location and the end results had to stand up at 4K in close proximity to the camera. Union designed a Houdini-based system to cope with the unprecedented number of digital human assets and their clothing in a way where they could be easily art directed as individuals; the director also needed the ability to easily choreograph them and deliver a believable result.

The VFX team conducted several motion-capture shoots in-house to provide some specific animation cycles that married with the crowd simulations they we were creating. This provided the team with even more flexibility during post-production, resulting in final crowd shots that looked authentic.

All told, Union worked on 288 VFX shots, including greenscreens, set extensions, window reflections, muzzle flashes, fog and rain and a storm that included a lightning strike on the Basilica. In addition, the team did a significant amount of de-ageing work to accommodate the film’s 8-year main narrative timeline as well as a long period in Pope Francis’ younger years.