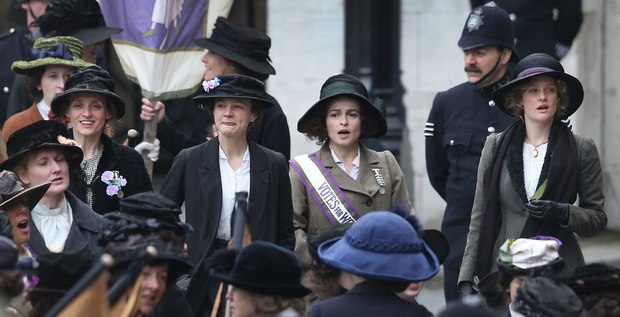 LONDON -- Union VFX has announced details of its involvement in Suffragette, Sarah Gavron’s intense drama about the foot soldiers of the early feminist movement, which had its European premiere as the opening film of the 59th BFI London Film Festival.

Gavron’s film, stars Carey Mulligan, Helena Bonham Carter, Brendan Gleeson, Anne-Marie Duff, Ben Whishaw, Romola Garai and Meryl Streep. It is the first feature film to tell the story of the ordinary, working-class women who, inspired by the fearsome suffragette leader Emmeline Pankhurst, risked their jobs, their homes, their children and their lives in the fight for equality and the right to vote. Helen Pankhurst, Emmeline’s great-granddaughter, also has a small part in the film.

Union’s work on Suffragette covered a broad range of “invisible effects”, such as building extensions, CG crowd multiplication, and the addition of vehicles and props, all of which needed to blend seamlessly with the real environments and set dressings. Among the standout sequences was a climactic scene at Epsom racecourse, which sees suffragette Emily Davison step out in front of King George V’s horse, with fatal consequences. Union’s creatives were called on to help swell the huge crowd of race-goers who witnessed the tragedy, and to help paint an authentic, historically accurate picture of an Edwardian sporting event. This required complex VFX work, involving compositing-plate and tiled elements, and the creation of CG characters, buildings, vehicles, contemporary props such as betting signs, and even a circus.

In addition to its work on several key scenes, including a dramatic riot sequence in London’s Oxford Street, Union also created a series of explosions, “rebuilt” Holloway prison and expanded a crowd of MPs and protestors at the Houses of Parliament, which was used as a set for a commercial film for the first time in its history.

“Suffragette is an inspirational and challenging film in every sense, including from a VFX perspective. Bringing Edwardian England to life authentically and convincingly was a real test of our creative and technical skills, but it was important to us to do justice not only to Sarah’s vision but to the ordinary yet extraordinary women who were brave enough to change the world,” commented Tim Caplan, visual effects producer and co-founder of Union.

Gavron reteamed with her Brick Lane screenwriter Abi Morgan and producers Faye Ward and Alison Owen Suffragette on Suffragette, which is produced by Ruby Films for Pathé, Film4 and the BFI, in association with Redgill Productions and with the participation of Canal+ and Cine-Cinema.