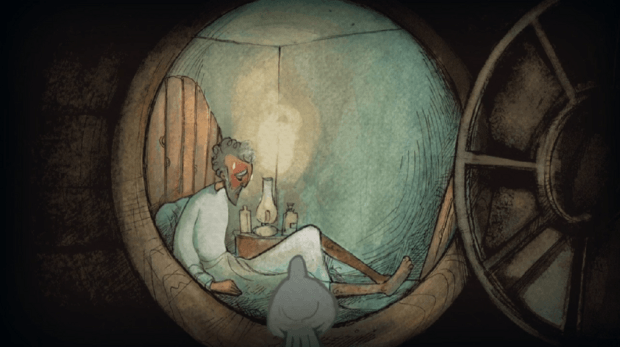 The exhibit will be housed in a museum space in London Bridge called The Old Operating Theatre. The animations have all been based on objects in the museum and their soundtracks have been created by Guildhall composition students.

Upcoming events also include “In Conversation” on November 7th, and a Live Music Performance to Dr Caligari’s Cabinet on November 14th. Chaired by Character Animation Course Leader Birgitta Hosea, “In Conversation” is a panel discussion between the animators of the films and the composers of the music, looking at their creative process and response to the museum and themes. In a live-performance event, the selection of Dr Caligari’s Cabinet presents themes that are common to the themes of the exhibition with music composed and performed by Matt Harding.

Check out Dead Pigeon, by Daby Ihsan, and read more about CUT! in the press release below:

CUT! is an exhibition curated by students from the MA Culture, Criticism & Curation course at Central Saint Martins that brings together new animations made by students from the college’s MA Character Animation course and new composers from the Drama Composition Pathway at The Guildhall School of Music & Drama. This unique collaboration takes place at The Old Operating Theatre, famous for its fascinating collection about historic surgery and original anatomical theatre.

The exhibition showcases 40 animations integrated within this quirky historic venue and offers contemporary interpretations on the 19th century surgical operations that took place there and the objects associated with them. The juxtaposition of antique objects and settings with digital animations provokes questions about scientific certainty and the effect of human imagination on it.

The Old Operating Theatre itself is also examined as a space that exhibits "weird" science -- a place of now-redundant but no less gripping surgical practice, where fear and fearlessness are fellow accomplices. With increased access to previously out-of-reach medical information, the patient’s view is now as important as the doctor’s, infecting science with a new subjectivity and emotionality, but also offering a wider view of human experience. This is reflected in the 40 animations in this exhibition, which act as mediators between the objects and the effect they have had on people’s lives.

In this way, this exhibition provides a provocative creative interpretation of the compelling relationship between doctors and patients, science and the imagination.