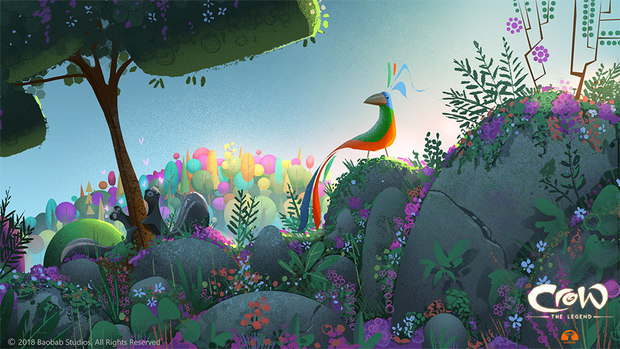 Baobab Studios’ virtual reality short film ‘Crow: The Legend’ to be recognized with awards for character design and production design.

NEW YORK -- The National Academy of Television Arts & Sciences has announced the honorees for outstanding achievement in animation who will be honored at the 46th Daytime Creative Arts Emmy Awards on Friday, May 3. The presentation will take place at the Pasadena Civic Auditorium in Southern California.

“The incredible leaps in innovation and production design of these animators continues to show the life, breadth and growth of this evolving craft,” said Adam Sharp, President and CEO, NATAS.

“The category of Individual Achievement in Animation is a Juried Award,” said Brent Stanton, Executive Director, Daytime Emmy Awards, NATAS. “A panel of experienced judges composed of animation professionals determine the excellence of submissions from individuals who work in the various craft areas: Character Design, Storyboard, Art Direction/Production Design, Background Design, Layout and Color and Character Animation. Entrants submit their work from a single episode. There can be one, more than one, or no recipients, depending on the level of excellence.”

The panel chose to honor the work of six individuals:

The Daytime Creative Arts Emmy Awards and The Daytime Emmy Awards recognize outstanding achievement in all fields of daytime television and are presented to individuals and programs broadcast from 2:00 a.m.-6:00 p.m. during the 2018 calendar year.

The 46th Annual Daytime Creative Arts Emmy Awards and The Daytime Emmy Awards is a presentation of the National Academy of Television Arts & Sciences.