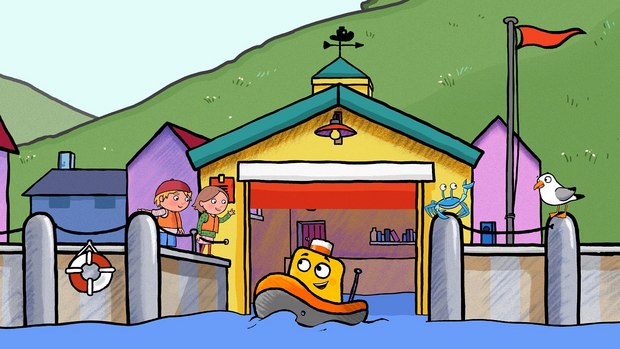 Turner Broadcasting has acquired the UK pay TV rights for Lupus Films’ brand new animated pre-school series Toot the Tiny Tugboat, it was announced.  The series will air on Cartoonito early next year.

Toot the Tiny Tugboat has been produced by Lupus Films, the award-winning creators of The Snowman & The Snowdog, and Boom Kids, the largest independent producer of children’s programming in the UK. All the series animation has been produced by Cardiff-based Cloth Cat Animation.

The series follows the aquatic adventures of Toot, an eager and energetic tug in his first year of service in the busy waters of the Harbour. Toot’s job is to lead big boats into the Harbour and then back out to sea, drag barges inland along canals, rescue ships in distress, help in construction, fight fires and generally work his little propeller off helping the inhabitants of and visitors to the bay.

Conjuring up a world of salty sea winds, melting ice-creams, flapping bunting and beaming sun, Toot the Tiny Tugboat transports its young viewers to a classic seaside holiday destination for a whole host of ocean-going adventures.

Sean Gorman, Director, Kids Channels, UK and Ireland, Turner Broadcasting  said, “We are delighted to have picked up the pay TV rights of this bright and breezy series and think that Toot the Tiny Tugboat has a big future ahead of him on Cartoonito.”