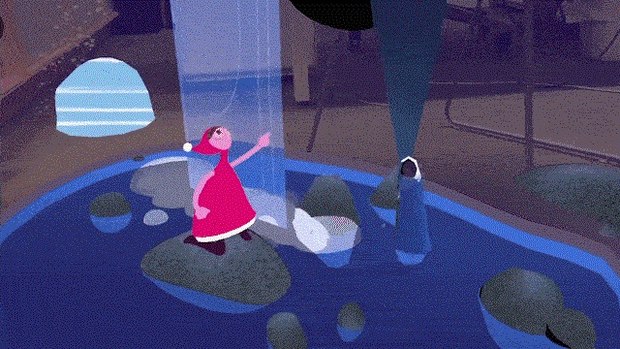 With their voice and actions, viewers interact with Little Red to boost her undermined confidence when it matters, and to locate and activate the objects she needs to win the day.

Bora sought to create a modern day version of the fairy tale that introduces Little Red as an inventor, working on something that will take Grandma’s gardening to the next level and beginning to learn to stand up for herself. From Little Red’s garden, we’re taken to Wolf Forest where she needs help with you-know-who, before activating a star map and assisting Little Red to celestially navigate to Grandma’s house.

Bora collaborated with Pollen and sound designer Andrew Vernon in creating an abstract soundtrack inspired by some of her favorite early 90’s games.

“It was an exciting fit to restructure a fairy tale since I had strong views on female-centric-entertainment, and an animated AR project felt like a good fit because of my work as production designing Pearl for VR,” says Bora. “Letting the audience sit with her at the moment she hits rock bottom felt like a great opportunity to explore empathy in an interactive medium.”

Wonderscope is compatible with the following devices running on iOS 11 or newer: iPhone 6S or newer; 2017 iPad or newer; iPad Pro.