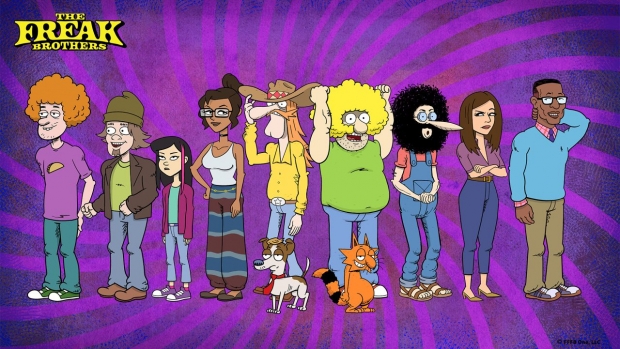 Tubi has announced its first-ever, star-studded original animated series, The Freak Brothers, based on the cult classic underground comic series by Gilbert Shelton. The 2D animated adult comedy paves the way as FOX Entertainment’s AVOD service expands its adult humor collection in the coming months. The first two episodes will debut on Sunday, November 14 with additional Season 1 episodes dropping on Sundays, one every week, through the finale on December 26. The animated series is produced by WTG Enterprises and distributed by Lionsgate.

The eight-episode series chronicles the escapades of a trio of stoner anti-establishment characters and their cat who wake up from a 50-year nap after smoking a magical strain of weed in 1969 and must adjust to life with a new family in present-day San Francisco.

On Sunday, November 14, TV viewers will get a sneak peek at The Freak Brothers during a special 90-second trailer airing during FOX’s “Animation Domination” block in Family Guy (9:30-10:00 PM ET/PT).

In addition, the series stars Adam Devine and Blake Anderson, who are also executive producers, as well as Andrea Savage, La La Anthony and Rapper ScHoolboy Q. Devine and Anderson voice Chuck and Charlie, a couple of weed savants always looking for the next side hustle, with hearts of gold hidden beneath their unwashed exteriors. Savage voices Harper, a no-nonsense techie who undoubtedly wears the pants in her household. Anthony voices Gretchen, a social-advocate lawyer who is the more idealistic and compassionate younger sister of Harper. ScHoolboy Q voices an animated version of himself who finds himself surrounded by “The Freaks.”