Agreement bring to free streaming platform top animated film such as the Oscar-nominated ‘Ernest & Celestine,’ and ‘A Cat in Paris,’ and Goya Award-winning ‘Nocturna;’ additional titles will roll out later this year. 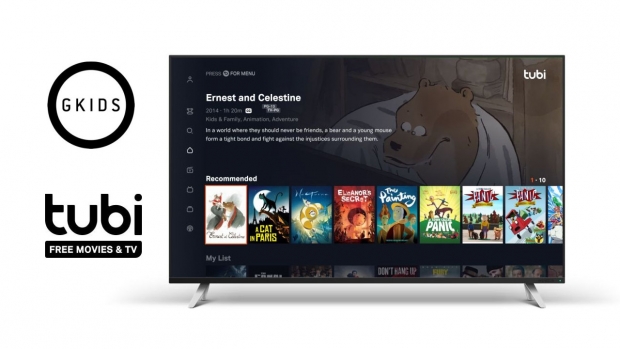 Tubi has partnered with GKIDS to begin rolling out a selection of the producer/distributor’s feature films, including the Academy Award-nominated features Ernest & Celestine and A Cat in Paris, as well as Goya Award-winning Nocturna, with additional titles to be available later this year. The deal continues Tubi’s recent expansion of animated content that includes thousands of hours of anime titles, including In This Corner of the World, Millennium Actress, Liz and the Blue Bird and Penguin Highway, as well as beloved animated titles The Iron Giant, Animal Farm, Peter and the Wolf, and Monster House.

GKIDS titles coming to Tubi in 2022 include:

GKIDS produces and distributes feature animation for both adult and family audiences. Since 2010, the company has scored 12 Best Animated Feature Oscar nominations with The Secret of Kells in 2010; A Cat in Paris and Chico & Rita in 2012; Ernest & Celestine in 2014; The Tale of The Princess Kaguya and Song of the Sea in 2015; Boy and the World and When Marnie Was There in 2016; My Life as a Zucchini in 2017; The Breadwinner in 2018; Mirai in 2019; and Wolfwalkers in 2021. GKIDS also handles North American distribution for the Studio Ghibli library of films, with titles such as Spirited Away, My Neighbor Totoro, and Princess Mononoke; as well as the critically acclaimed television series Neon Genesis Evangelion.

Tubi has more than 40,000 movies and television series from more than 250 content partners, including every major studio, in addition to the largest offering of free live local and national news channels in streaming. The platform gives fans of entertainment, news and sports an easy way to discover new content that is available completely free.