Joining the platform’s expanding adult animation slate comes a tale of three bears - drug dealers defending their turf from fracking with the help of their furry woodland friends; a release date for the show, animated by Bento Box Entertainment, has not been announced. 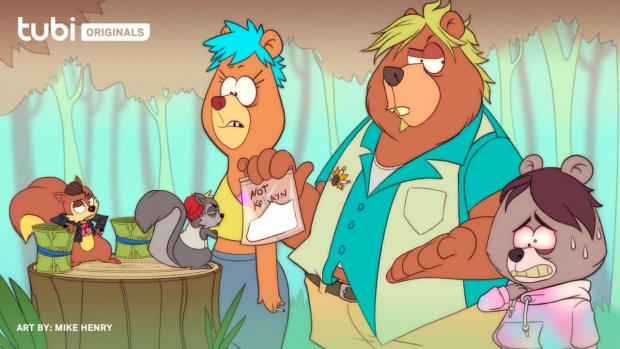 Tubi (www.tubi.tv) greenlit the adult 2D animated comedy series Breaking Bear, which bills itself as a parody of the tropes of mobster dramas, combining elements of Yogi Bear with The Sopranos. The show is created by Julien Nitzberg (The Wild and Wonderful Whites of West Virginia) and produced by Cartel Entertainment (Creepshow, Twelve Forever, Day of the Dead) and Tom DeLonge’s To The Stars Media (Monsters of California, Unidentified).

In the show, three bear siblings must defend their cave against fracking, choosing a life of crime and drug dealing. They enlist the help of their furry woodland friends, only to come up against the Russian Mafia, local Hell’s Angels, and polar bears who hate anything that isn’t white. No release date was announced.

The show follows the escapades of three bear siblings who decide they must start selling drugs to raise money and save their home after gas companies start fracking next to their cave. The bears soon enlist other forest animals in a scheme that will pit them against oil companies, The Russian Mafia, local Hell’s Angels, and polar bears who hate anything that isn’t white.

“When The Cartel pitched a series with cartoon animals as mobsters, I knew it was an offer I couldn’t refuse,” said Adam Lewinson, Chief Content Officer, Tubi. “This is the perfect project to expand our adult animation offering after the stellar success of The Freak Brothers, cementing Tubi as a destination for adult humor.”