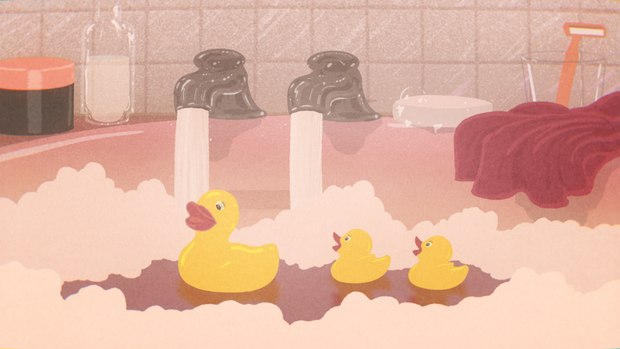 Each year more than 12 billion tons of freight is shipped around the world. That’s 90 percent of all household goods as well as over 2 billion tons of fuel, and that’s even before we get to all the grain and food.

Trunk directors Alasdair Brotherston + Jock Mooney have been on this factual journey while creating a short about the International Maritime Organization’s Day of the Seafarer, which falls on June 25th. The minute-long film is pure Alasdair + Jock. Initially taking inspiration from the beautiful illustrations of Charley Harper and iconic 1920s and 30s travel posters, the work quickly evolved into a more painterly hybrid style that sits between the two sources.

“We loved working on the project not only as it was for such a good cause but the IMO gave me and Alasdair a lot of creative freedom, allowing us to build on the style we had evolved creating our short “Gelato go Home,” Jock noted. “We used the same brilliant composer James Orman who produced a soundtrack just the right side of Dire Straits and Barnaby Templer at Fonic who once again created the sound design. Alasdair introduced some lovely cuts and wipes my personal favorite was seeing the icebergs turn into the cat’s ears!”

The film is a visual journey that makes subtle connections between all the things we take for granted, from bread to rubber ducks, to the seafarers who risk their lives to deliver them. The last shot shows an entire town lit with the message “Thank You.”

“We worked hard to get the balance right throughout the film so that it wasn’t patronizing or too gushing we wanted to show the reality of the situation, all be it with a big dollop of artistic license,” stated Alasdair.