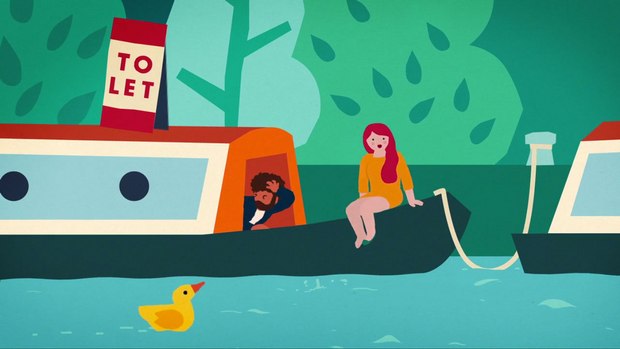 Following the previous success of the Rightmove ‘School checker’ campaign, Trunk Animation again brought together the talents of director Layla Atkinson and illustrator Anna Kövecses to create a new 20” TV spot for property website Rightmove. The advertisement airs this week.

Working closely with agency Homebrew, Atkinson and the team at Trunk developed the script and storyboard which follows a young couple as they go house hunting. They visit a range of properties, only to find that they’re too high, too low or too windy, before finally finding the perfect rental.

Kövecses, who grew up in Hungary, was challenged to create a typical British, urban environment. Atkinson noted: “Along the way we developed mews courtyards, Tudor cottages and Georgian terraces, before settling on our final selection.” The narrative plays out amongst high rises, narrow boats and back to backs, while being punctuated by incidental details like the Austin allegro, a celebration of Atkinson’s childhood, cats in windows and doves on rooftops. Atkinson and the animators bring a sense of warmth and humor to the couple’s adventure. Subtle details, such as the woman’s shoe falling into the canal, help create the playful tone that Rightmove was aiming for in their quest to capture the sense and meaning of “home.”

With two projects in the bag for Rightmove, Atkinson noted, “It was great to work with Anna again. She’s such an amazing illustrator and I love her style so much. The temptation to just ask her to draw things for fun was always tugging at my moral compass! Would definitely love to work together again in the future!”