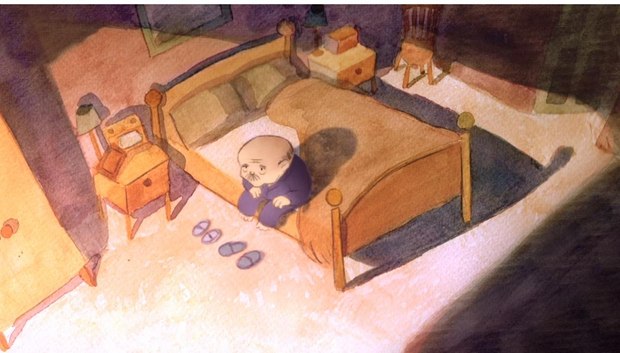 LONDON -- Award-winning film director Peter Baynton has been working at Trunk Animation creating a video for Benjamin Scheuer’s song, “Weather the Storm.” The track is from Scheuer’s highly acclaimed theatrical show The Lion, an autobiographical one-man musical that has won numerous awards including Best New Musical at London’s Off-West End Awards and a Drama Desk Award for Outstanding Solo Performance in New York. Scheuer is currently on tour with The Lion throughout the United States. “Weather The Storm” appears on Scheuer’s forthcoming album Songs from The Lion (out, June 3 via Warner/ADA).

The video for “Weather The Storm” follows Dickie, a recent widower who has run out of toothpaste, on his quest for self-reliance.

“The song contains a theme and a message that is universal,” Baynton commented. “Initially we thought we’d tell the story through three very different characters, but during the months of storyboarding Benjamin and I fell in love with the personality embodied in Dickie, the old fellow who is now our hero.”

Using watercolors to produce cubist forms with Lowry inspired elements the finished video is beautiful in both heart and design. The team at Trunk used TV Paint for the drawn character animation, which was the only digitally created element in the video, and After Effects for compositing. The animation from storyboard to completion took only nine months.

“Weather The Storm” is the third video released by the team of Baynton and Scheuer. Their animated video for the song “The Lion” premiered at the 2013 Annecy Festival, where it won the Jury Award for Commissioned Film; it has since won numerous awards, including the Public Choice Award at the 2014 British Animation Awards.

“Working with Peter and Benjamin has been a wonderful experience,” said Trunk’s executive producer Richard Barnet. “All of us at Trunk are delighted with this beautiful uplifting video that superbly interplays humor with pathos. The video is the first to be co-produced by Trunk Animation and Baynton’s own Radish Pictures and we know it will be as successful as Peter’s previous videos for Benjamin. Indeed, it was premiered at the 2016 British Animation Awards, where it has already won Public Choice for Best Music Video.”