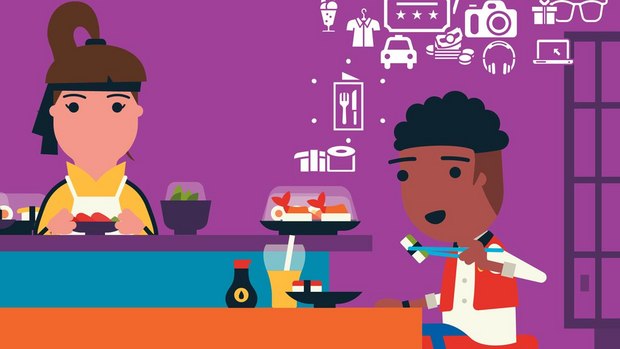 LONDON – Trunk Animation has created eight short films that explain the multiple functions of a new app called Jenius, from the PT Bank Tabungan Pensiunan Nasional Tbk (BTPN), based in Indonesia. Mobile financial management is an indispensable part of life when your country has a quarter of a billion people spread over fourteen thousand islands and the nearest bank or ATM can be a boat ride away. With the Jenius app a user can use the $Cashtag to turn a customer’s name into an account number then using Send It they can easily transfer money, using Pay Me they request payments, using Split Bill they can send and receive payments amongst friends and Dream Saver allows users to set saving targets.

Working with Leo Burnett’s Jakarta office Encore Pictures contacted Trunk with an outline brief and initial script. The client wanted the films to have a simple clean graphic style but needed Trunk’s expertise and experience to turn their ideas into cracking shorts. Directors Pete Mellor and Layla Atkinson worked on the scripts defining the essence of each, embellishing, polishing and injecting them with humor and ensuring they could be animated.


Mellor commented, “The initial scripts whilst containing a clear idea that needed to come across lacked a certain pace and seemed quite dry. We infused them with more humor and characterization, for example in one script to highlight the ability to make a payment with one click the clients had the hero fall out of a tree and end up in hospital, with only one finger working. We embellished this by making the fall far more dramatic and humorous with nods to the Simpsons and after the hero has made the payment his troubles continue with a collapsing bed. We also wrote unique comical call-backs that appear under the tag line text at the end of each film. Having a deep knowledge of animation was also crucial ensuring that the scripts could be animated within the client’s time-frame” To create the client’s clean graphic look executive producer Richard Barnett brought in Peepshow Collective's Spencer Wilson. His illustrations had been used to great effect on a set of films Trunk had created for Kaspersky. Once the client had seen examples of Wilson’s work and the new scripts they were delighted. With the scripts signed off a team at Trunk was pulled together and spent the next four weeks working like devils to deliver the eight films within the tight deadline.

The resulting films have a wonderful feel and pace. The client's color palette was augmented by Spencer ensuring the films worked beautifully together while matching the Jenius brand. All the films have a voice-over yet they also had to work without one, as “This was a great project to produce especially as we once again worked with Spencer and Pete from Peepshow Collective who we had worked with on the Kaspersky and the Car Buying Service projects,” noted Barnett. “It was also great to work for an Indonesian client, as back in 2011 we were honored by a visit to the studio from his Excellency Yuri O Thamrin the Indonesian ambassador. The meeting left us with a soft spot for Indonesia, so you can imagine our delight when out of the blue Leo Barnett and Encore pictures in Jakarta commissioned us for this job.”