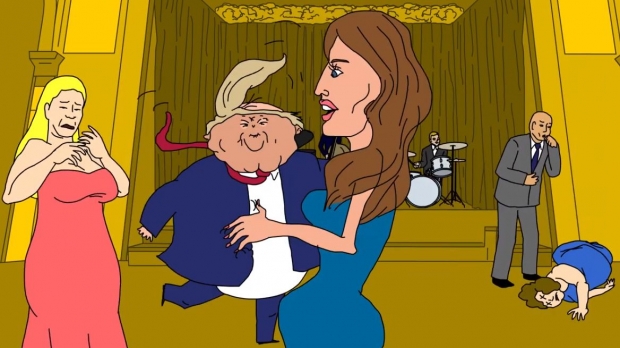 Billy Shebar, David Roberts, and 110th Street Films’ Webby Award-winning shorts series, “Trump Bites,” is back with a new set of satirical shorts. Launched in 2018, the short 2D animated fantasies, based on actual Trump audio clips, premiered on the New York Times web site, and have since been broadcast on ARTE and shown before feature films at the IFC Center in New York.

Series 2 consists of four new films, produced and directed by the Shebar and Roberts: three episodes are animated by famed indie animator Bill Plympton and executive produced by Matthew Modine, with the fourth - funded by The Lincoln Project - animated by Leah Shore, whose fantastic Don’t Touch Your Face pandemic-inspired short is one of AWN’s favorites of the year.

Check out I Alone Can Fix It – you can find the other three new Series 2 shorts, as well as Series 1, here.

According to Roberts, the idea for the series originated in the early days of Trump’s presidency. “From his first weeks in office, it quickly became clear that with Trump at the helm, we were all headed for lots of trouble,” he shares. “We thought satire could be a powerful antidote, but what do you do with someone who is already a parody of himself? The answer was to use real audio clips of Trump as the basis of surreal animations that get inside his brain. We were inspired by Robert Smigel’s Fun with Real Audio from SNL, and we settled on a format that was short and shareable.  The idea was that all these short animated fantasies would create a kaleidoscopic view of Trump’s twisted mental landscape.”

After Shebar and Roberts sold a 30-day exclusive for Series 1 (three 1-minute episodes animated by Bill Plympton) to the New York Times, they went viral and won a Webby Award. The second series premiered on ARTE in Europe and was also screened at the IFC theater in NYC for three weeks. They were also released online right before the November 3 election. “Bill animated the first three of the new episodes (#4-6), and we hired Leah Shore to animate #7 after we saw her amazing short Old Man on Criterion.”

The new season is a bit edgier, Roberts notes, as it “manages to tackle Trump’s famous Access Hollywood tapes, summarizes his Russian collusion with a riff off the famous Russian roulette scene from the Deer Hunter, and tries to capture Trump’s unique strategy in dealing with COVID-19.”

“We have collected together dozens of Trump quotes stretching all the way back to the 1980s that we thought would make good episodes,” he continues. “We found the best episodes aren’t necessarily Trump’s most famous or raunchy quotes, but the ones that gave an unintended window onto his psyche.” Produced during the pandemic, the shorts each took between 3-4 weeks to complete. “We worked with the legendary animator Bill Plympton, whose hand-drawn colorful grotesque style was perfect for what we were trying to do,” Roberts says. “We love old-school 2D animation, and Bill is about as old-school as you can get. Every time we went to his office, he was on his couch with his colored pencils drawing some frame of animation. He doesn’t use email, computers, etc. We enjoyed the collaboration with Bill. In Series 1, we would typically give Bill a handful of quotes with thoughts on accompanying visuals, and Bill would quickly produce thumbnails for the ones he felt were most promising. We would then jointly decide which ones to pursue, and we worked closely throughout the process. In Series 2, we had a similar process, but Bill brought more of his own ideas for episodes to the table; I Alone Can Fix It was his idea.”

“We had a similar dynamic with Leah and the COVID episode,” he adds. “She was lovely to work with, Similar process there, where we came up with the basic concept and the audio clips, and she ran with it.  She brought so many brilliant visual ideas, from a sinking Mar-a-Lago to Melania’s jitterbug moves.  We were under a tight schedule, as the Lincoln Project funded this one and we needed to finish it quickly before the election.”

Shebar and Roberts co-founded 110th Street Films with the idea of incorporating animation into documentary films.  Shebar is an Emmy-nominated filmmaker whose credits include the Showtime series Dark Net and the feature film Dark Matter with Meryl Streep. Roberts is a former academic physicist and U.S. diplomat turned writer/filmmaker. Though producing animated satirical shorts is a significant departure from their main studio focus, they’ve made the jump quite successfully. Roberts’ goal in the project, ultimately, is that audiences come away chuckling. “Certainly, a laugh,” he concludes. “We all need one nowadays. And perhaps a new window on how Trump’s mind works…or doesn’t.”