Troika rebrands A&E developing a brand platform and identity around the tagline ‘Be Original.’ 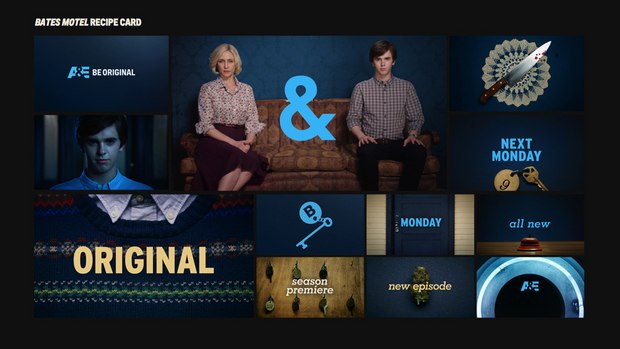 Brand consultancy & creative agency Troika has partnered with A&E Network to rebrand the cable network by establishing a brand identity, anchored in custom shot talent and show iconography for Bates Motel, Duck Dynasty, Longmire and Those Who Kill.

A&E has undergone a dramatic and successful transformation to a premium entertainment network.  Now the home of the most-watched nonfiction series in cable history, Duck Dynasty, and critically acclaimed scripted series Bates Motel and Longmire, aims to align the brand with its wide variety of entertainment-driven original programming and embrace their unique mix of content and characters.

“Be Original,” which acts as the network’s internal brand platform and externally facing tagline, anchors the rebrand. Speaking to A&E’s strategy to highlight their 100% original programming lineup, provocative characters, and unexpected storytelling, “Be Original” also informs the execution of A&E’s brand communication, identity and launch campaign.

Guy Slattery, EVP of Marketing at A&E noted, “As the A&E brand continues to evolve, it has become increasingly important to let both the consumer and trade know what we stand for. Troika understood where A&E was heading, and was able to develop an identity that embraces the unique characteristics of our programming through design, communication, and live-action shoots.”

“Be Original” is activated through a brand identity that brings a revamped attitude to A&E. Show personalities are brought to the forefront through bold, minimalistic graphics, accented by show-specific textures, objects, environments and talent imagery. Each show has its own unique “recipe card,” which acts as a guide for all promotional and marketing materials. In the spirit of originality, the identity also features original fonts, music, and show iconography.

The custom-shot talent and show iconography was an effort led by Troika, acting as the lead production company for live-action shoots across Pennsylvania, Louisiana, New Mexico, Los Angeles, and Vancouver. Production was accomplished with a crew of over 250, with assets captured informing the brand identity, launch campaign, print and out-of-home marketing, and show campaigns. A comprehensive shoot guide was delivered for A&E’s internal teams to further build the libraries for upcoming shows.

“A&E doesn’t just talk about being original, they walk the walk. We wanted to uphold these standards, so originality drove all creative decisions during the A&E rebrand. Developing a 100% unique identity that is centered around some of TV’s most beloved shows was an amazing opportunity, and it allowed the creative team the ability to take chances and develop an identity unlike anything else on the air.” said Reid Thompson, Creative Director at Troika.

The revamped A&E brand launched on December 11th during the Duck Dynasty Christmas special, and continues to roll-out across on-air, print, and digital brand assets. Troika continues to partner with A&E on additional branding initiatives throughout 2013 and into 2014.