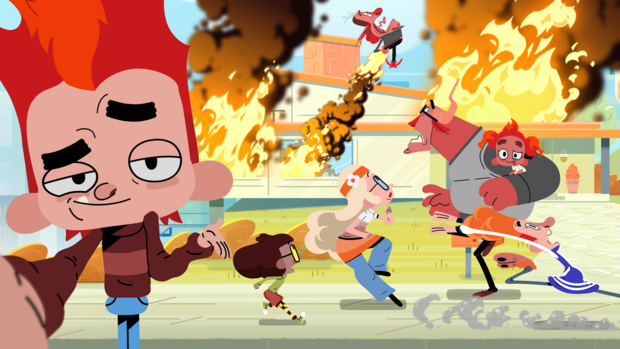 The 52-episode, 11-minute animated comedy series is being written and developed by the multiple BAFTA Award-winning writing team of James Lamont and Jon Foster (The Amazing Adventures of Gumball, Cuckoo, Paddington) and is Executive Produced by Andrea Gorfolova and Frank Saperstein for Tricon and produced by Camilla Deakin and Ruth Fielding for Lupus Films. My Big Red Head is directed by Miklos Weigert (The Amazing World of Gumball, LEGO NEXO Knights, The Eagle). Tricon International will handle global distribution and rights management for the property. Aimed at 8 to 12-year-olds, My Big Red Head will follow the animated antics of the Mayhems -- a family living in Greensville, Pennsylvania, USA. In many respects the Mayhems are just like an ordinary family. Dad (Bub) runs an auto repair shop, Mom (Pam) helps out with the company accounts and the three kids -- Kevin, Red and Missy -- go to the local school. But that’s where the normality ends. Bub is in fact a Chaos Monster (second in line to ‘The Realm of Eternal Chaos’ no less), which means the three Mayhem children have to chart the stormy waters of growing up as half-human, half-monster hybrids.

“We are extremely excited about My Big Red Head,” says Fielding. “James Lamont and Jon Foster are a brilliantly talented comedic writing team and they’ve created a wonderful world and cast of characters who demonstrate just how hard it can be growing up in modern America when your family isn’t quite the norm!”

“My Big Red Head is instantly relatable to anyone with a family or who is trying to fit in while still being true to themselves,” adds Saperstein. “We are fortunate to have attracted some of the industry’s top creative talent to the project and look forward to our partnership with Lupus Films and continuing collaboration with Disney Channels EMEA.”