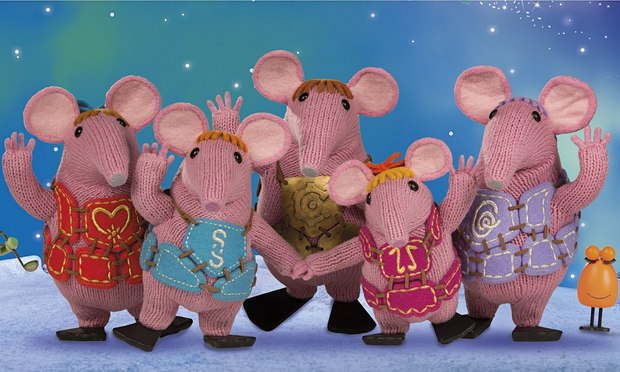 TORONTO -- Corus Entertainment’s Treehouse has announced that two adorable, internationally acclaimed preschool series, Clangers and Hey Duggee will premiere exclusively on the TreehouseGO app over the holidays on Friday, December 25. Families will find Clangers and Hey Duggee in the sneak peek bucket on the app leading up to the premieres on the Treehouse TV channel in January.

“We’re excited to add these two new global hits to our TreehouseGO app over the holiday season,” said Colin Bohm, Executive Vice President, Head of Corus Kids. “TreehouseGO has proven hugely popular with both preschoolers and parents and the exclusive debut of Clangers and Hey Duggee on the app is our special holiday gift to our Treehouse fans.”

Clangers, which debuted on Cbeebies in the UK and PBS’s Sprout in the US this past summer is a reboot of the beloved 1969 BBC children’s series. Narrated by William Shatner, the highly anticipated and revitalized Clangers took home a BAFTA for best preschool animation this past fall. The stop-motion series stars the Clangers, pink, inventive and lovable mouse-shaped creatures who live on a little blue planet, out in the starry stretches of space not far from Earth. Its surface is covered with holes, topped with metal garbage can lids, which lead down to their home beneath the surface of the planet. The curious Clangers speak only in whistles, eat green soup and blue string pudding and have wonderful adventures on their little blue planet. Clangers premieres on the TreehouseGO app on Friday, December 25. The series will roll out on the Treehouse TV channel on Monday, January 8 at 7:20 p.m. and will air regularly on Fridays at 7:20 p.m.

Hey Duggee features a big lovable dog named Duggee who runs a club for preschoolers that inspires children to have fun, be energetic and, most of all, try new things! Each episode starts with Duggee welcoming a bunch of curious little characters who are dropped off at the club by their parents. Duggee leads this little group called The Squirrel Club in all kinds of adventures, in which they earn activity badges along the way. Most of all Duggee shows the little ones how great it is to work as a team. Hey Duggee was nominated for a BAFTA in preschool animation this past fall and airs in several territories around the world including the U.K., Australia, Europe and Asia. Hey Duggee premieres on the TreehouseGO app beginning on Friday, December 25. The series will roll out on the Treehouse TV channel on Saturday, January 9 at 12:20 p.m.

Since its June 2015 launch, the TreehouseGO app has consistently ranked in the Top 10 apps in the Kids iPhone category. TreehouseGO is the first of several apps Corus launched in 2015 to ensure audiences have convenient access to their favorite brands and content anywhere, anytime. Designed for kids 2 to 6, TreehouseGO is free to Treehouse TV subscribers and offers the channel’s most popular and current Treehouse series such as Little Charmers, Trucktown, Blaze and the Monster Machine, Toopy and Binoo, Bubble Guppies, Dora and Friends and more.