TRAILER: Season 2 of ‘The Adventures of Rocky & Bullwinkle’ Debuts Jan 11 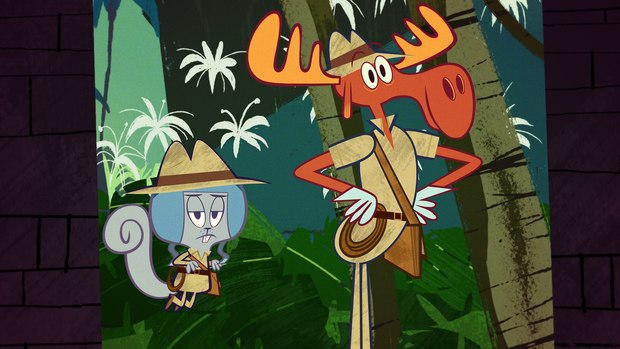 DreamWorks Animation Television’s ‘The Adventures of Rocky & Bullwinkle’ has been nominated for three Annie Awards.

Ahead of the Season 2 debut of The Adventures of Rocky & Bullwinkle on Amazon Prime Video on January 11, DreamWorks Animation Television has dropped a brand-new trailer for the series featuring the beloved characters in updated modern-day situations

From executive producer Scott Fellows, the world-famous talking moose and flying squirrel are back in Season 2 of The Adventures of Rocky and Bullwinkle, a serialized comedy divided by unique arcs about two goofball best friends who routinely find themselves thrust into harrowing situations but end up saving the day time and again.

The first arc of the season, “Almost Famoose” sees Rocky & Bullwinkle go viral as famous rock stars, followed by their lofty treasure hunting plans in “The Legends of the Power Gems” arc, and -- last but not least -- the duo embarks on their biggest adventure yet in and as “Amazamoose and Squirrel Wonder!”

As always, Rocky and Bullwinkle’s innocent and silly ambitions end up dovetailing with Fearless Leader’s sinister plans to take over the world, our heroes are set on a collision course with notorious super spies Boris Badenov and Natasha Fatale.

Watch the Season 2 trailer in the player below:

The voice cast for season two includes Tara Strong (The Powerpuff Girls; Fairly OddParents; Teen Titans Go!) as Rocky J. Squirrel and Brad Norman (Goldie and Bear) as Bullwinkle J. Moose, with guest cast members including Mark Hamill (Star Wars) as both himself and “Captain Great Guy,” Mario Lopez (Saved by the Bell) as himself, Weird Al Yankovic (How to Be a Latin Lover) as himself, and Lil Rel Howery (Bird Box) as Chuckles.