Trailer: ‘Niko and the Sword of Light’ Premieres on Amazon July 21 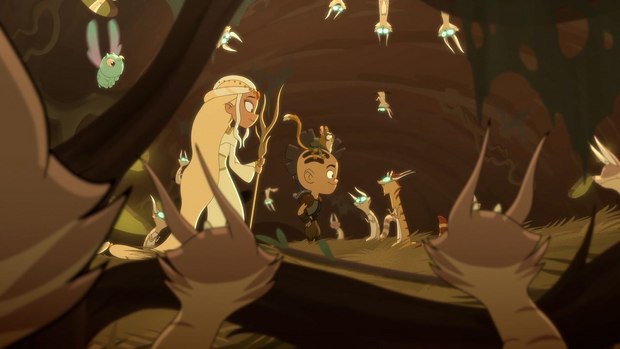 Check out the brand-new trailer in the player below:

“We’re excited for kids and families to enter into Niko’s unique, rich world and meaningfully connect with the series characters as they tag along on epic adventures together,” said Tara Sorensen, Head of Kids Programming at Amazon Studios. “The series pilot was extremely popular among viewers, who were won over by the show’s quirky engaging storylines and humor, and we can’t wait to present them with many more exhilarating escapades in Season 1.”

Niko and the Sword of Light follows 10-year-old Niko, the last of his kind in a strange, fantastical world, as he embarks on an epic quest to defeat the darkness and bring the light back to his land. Armed with his magic sword, brave Niko journeys to the Cursed Volcano, making new friends and powerful foes along the way, all while uncovering secrets about his mysterious past.

Based on the motion graphic comic by Imaginism Studios, Inc., the studio behind character and concept designs for Tim Burton’s Alice in Wonderland and Men in Black 3, and Studio NX (The Carrot and Rabbit Show, Tree Fu Tom), Niko and the Sword of Light is animated by Titmouse (Motorcity, Metalocalpyse, Turbo FAST, Randy Cunningham: 9th Grade Ninja) and executive produced by Rob Hoegee (Generator Rex, League of Super Evil, Storm Hawks, Teen Titans) who also serves as showrunner.

The Niko and the Sword of Light pilot is currently available to stream and enjoy using the Amazon Prime Video app for TVs; connected devices, including Amazon Fire TV and mobile devices; and online at www.amazon.com/originals.