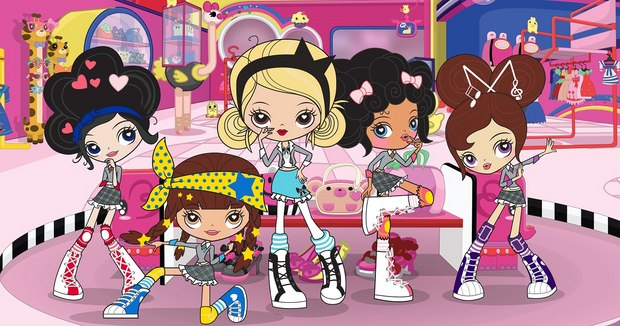 BURBANK, CA -- Nickelodeon has announced that superstar Gwen Stefani’s animated series Kuu Kuu Harajuku will premiere exclusively on the network in the U.S. beginning Monday, Oct. 3, at 4 p.m. (all times ET/PT). The 26-episode series, co-created and executive produced by Stefani, follows the kuu kuu adventures of the band HJ5 -- Love, Angel, Music, Baby and G -- through their super cute world of music, fashion and style. Kuu Kuu Harajuku will air at 4 p.m. through Friday, Oct. 7, and continue with premieres in its regular timeslot of Saturdays at 8:30 a.m. on Nickelodeon.

“Partnering with Nickelodeon on Kuu Kuu Harajuku is a dream come true!  It’s been incredible to see the Harajuku Girls and the world they live in come to life,” said Stefani. “The artwork is so beautiful and the whole series turned out better than I could have ever imagined. I love that this is an animated series for young girls that celebrates creativity, imagination and individuality. I can’t wait for everyone to see it!”

Kuu Kuu Harajuku follows Love, Angel, Music, Baby and their inspirational leader, G, as they form the super-talented band, HJ5. Thanks to their manager Rudie, angry aliens, NoFun politicians, hungry monster pets, and other obstacles, every gig is interrupted and the girls never get to complete a concert -- but G and her friends never give up.

In the series premiere, “Totally Teen Genie,” Angel releases a Teen Genie with attitude and tries to use her three wishes to help HJ5 win a Totally Teen Awards Golden Hoodie trophy. Then in “Angel's Flight,” Angel’s determined to restore her reputation after an unflattering picture appears online.

The original idea and inspiration for the 2D animated series came from Grammy Award-winning musician Stefani and her love of pop art and life-long admiration for the street fashion and creative youth culture found in the renowned Harajuku neighborhood of Tokyo, Japan. It was while writing her first solo album that Stefani created the original Harajuku Girl characters as a celebration of the creativity and individualism she saw and loved in the Harajuku District.