New animated series based on the popular video games from Double Fine Productions is executive produced by Will McRobb, Fred Seibert, Kevin Kolde and Eric Homan. 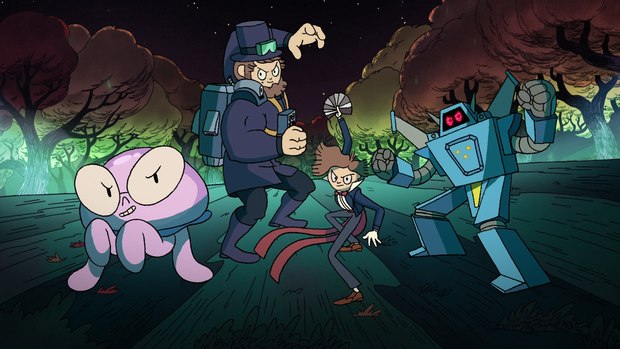 When Costume Quest arrived on video game screens in 2010, no one anticipated the cult following and accolades it would get. Now, this popular game is about to become the next kids animated hit when it debuts on Amazon Prime on March 8th with a little help from Frederator Studios, the powerhouse behind franchises including Castlevania, The Fairly Oddparents, and Adventure Time.

Based on the video game series by Double Fine Productions (Psychonauts, Broken Age) and the world originally created by Tasha Sounart, Costume Quest is a funny and mysterious animated series aimed at six to 11-year olds (and, of course, older fans who love the video game). The show follows four kids facing off against the dark forces lurking in the shadows of their sleepy town of Auburn Pines. To overcome obstacles and achieve their goals, they must learn to unlock and master the magical powers of supernormal costumes -- with each costume is a new set of transformations and powers.

The concept for the Costume Quest video game was created by staffers at Double Fine in one of their sessions they call “Amnesia Fortnights,” where small groups come up with prototypes for potential video games, and then bucking the usual trend of multi-year development, the Costume Quest game was fully completed within 12 months. The game went on to resonate with fans across the globe and was awarded PSN Game of the Year 2010 in PlayStation: The Official Magazine and Best Downloadable Game at the 2010 Spike Video Game Awards. More than graphics and special effects, it was the storyline that reeled players in and also lent itself to a popular webcomic series eponymously named. The concept was developed by Sounart, a Double Fine alum who is now at Pixar, and co-written by Double Fine CEO and founder Tim Schafer.